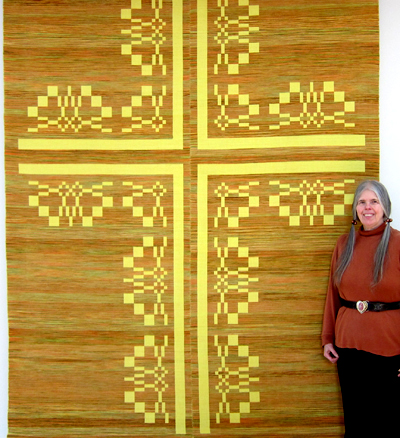 Pat Hilts shown here with her most recent liturgical weaving created for and given as a gift to Holy Wisdom Monastery, Easter III

When Pat Hilts responded to a posting on a bulletin board in the Home Economics Building on the University of Wisconsin-Madison (UW) campus in 1976, she had no idea that she was about to enhance the lives of many people for years to come. “The posting was from a place called St. Benedict Center and they were looking for someone to do some weavings for the monastery,” says Pat. “I had been spinning wool and weaving since 1968 so I decided to answer the ad.”

Pat met with Sisters Mary David Walgenbach and Joanne Kollasch and Frank Kasmarcik, a consultant in church design and oblate of St John’s Abbey, Collegeville, MN, about the project. She submitted her designs and a 40 year collaboration began. “We have been blessed by Pat’s work for many years,” says Sister Mary David. “Her most recent weaving, Easter III, was a gift to the monastery. Pat’s generosity is truly remarkable considering the many hours she spent on this project.”

Pat and her husband Victor moved to Wisconsin in 1965. She taught mathematics at Marshall High School and Victor was an assistant professor in the History of Science department at the UW. After teaching for five years, her interest in weaving led her to earn a master’s degree in the Related Art Department of the UW School of Human Ecology.

Pat travelled to London in the summer of 1973 to do research at the British Library and discovered early weaving books. “During my translation of a German weaving book published in 1677, I discovered a specialized loom harness and weaving structure. I was able to translate the patterns of Marx Ziegler and generate images of the patterns with the computer. I also modified my loom to accommodate the patterns.”

Pat eventually translated five books and has lectured at conferences about German weaving techniques. “Being involved in the history of weaving has had a major impact on my designs,” she says. “As I discovered new techniques in the books, I incorporated them into the designs for the banners.” 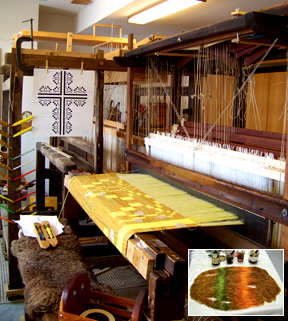 Stages in the weaving process include hand-dying the yarn (inset), designing the pattern (hanging beside the loom), stringing the warp (length-wise fibers) onto the loom, and finally, many hours of actual weaving. (photos by Pat Hilts)

Over the years, Pat has woven eight banners for the monastery and three are currently on display in the monastery building. The most recent, Easter III, is a shining yellow cross on a variegated background which has graced our worship space in the assembly room throughout the Easter season.

Pat submitted more than 10 designs for consideration before the final one was chosen. In addition to writing out a complicated pattern and preparing the loom, Pat dyed 12 skeins of wool with a paintbrush to reflect the rich colors of the prairie. She takes meticulous records and photographs of her work as it progresses. “This latest project representing the prairie coming to life in spring has taken about a year from start to finish.”

The Easter III banner has now been replaced in the assembly room by The Tree of Life, a green weaving for the liturgical season of ordinary time, one of Pat’s earlier creations. Two other banners woven by Pat hang year-round in the gathering area, and we look forward to bringing Easter III out again for the Easter season next year. “It is an honor and a privilege that so many people can enjoy my work in this beautiful space.” Everyone who sees Pat’s work agrees it is an honor for us to have such beautiful weavings in our midst!