Images from our history: 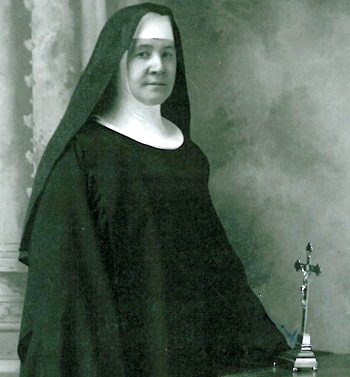 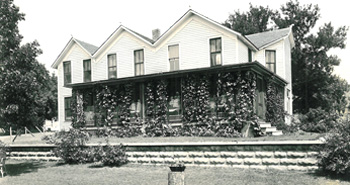 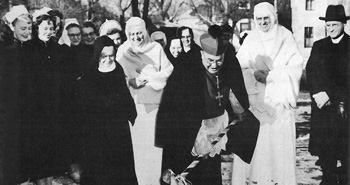 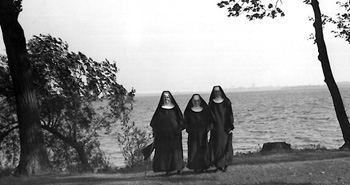 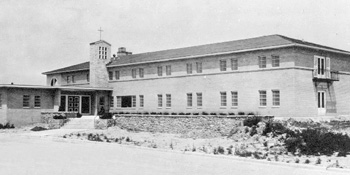 Prayer with Brothers of Taizé, 1966 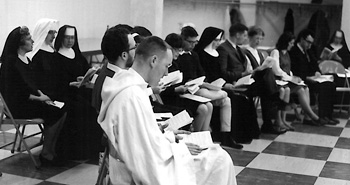 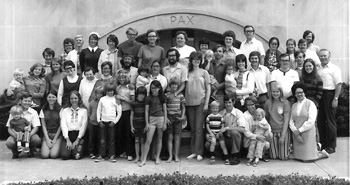 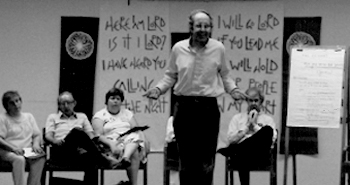 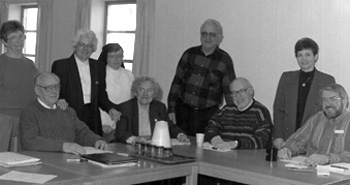 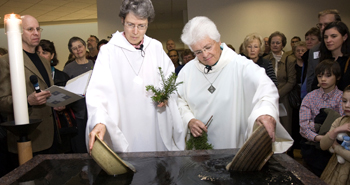 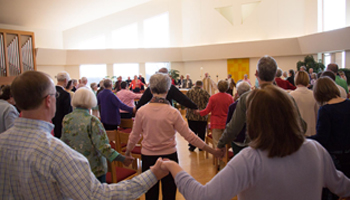 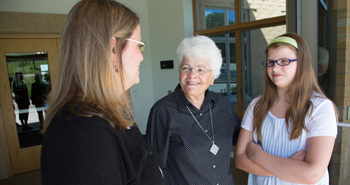 Lessons on the prairie 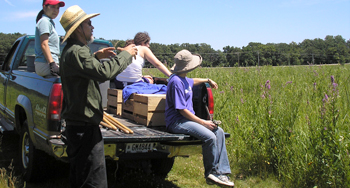 Our community of Benedictine sisters, though small in numbers, has met changing times and new challenges with vision and faith. Our history reaches back to the spirit of the earliest Benedictine communities founded in 6th century Italy by Benedict of Nursia. We continue into the future as the first ecumenical Benedictine community in the US.

Beginnings are difficult. Saint Benedict, the founder of Western monasticism, writes in his Rule for monks over 1,500 years ago: “The road that leads to salvation is bound to be narrow at the outset” (Prologue, Rule of Benedict). This wisdom is evident in the history of Holy Wisdom Monastery.

Huge adjustments by the sisters were necessary to live and minister on the American frontier. In Switzerland they had lived an enclosed monastic life and spoke their native German language.

Mary Ellen McDermott, a young American woman, chose to enter this German-speaking Benedictine community in Conception, Missouri. She became Sister Gertrude and learned to speak German so well that many believed her to be of German descent.

In 1881, Sister Gertrude and several sisters traveled by train and boat to the Standing Rock Indian Reservation in the Dakota Territory to teach at a government school for Native American children. After many challenging and unusual experiences, including a friendship with Chief Sitting Bull, the Lakota warrior, Sister Gertrude became the founding prioress of a new Benedictine community in Iowa.

Our community in Iowa

Mother Gertrude McDermott arrived in Sioux City, Iowa with four sisters.  The sisters put down roots in the heart of the city and became the Sisters of St. Benedict of Sioux City, Iowa. They quickly established a residence for girls and women who needed to work in the city to support themselves and their families.

In 1907 our community founded St. Vincent’s Hospital in Sioux City, where we served the poor and indigent. No one was turned away from the hospital because they were unable to pay for their care. Often the reimbursement to the sisters was garden produce and maybe a chicken or two. Ministries expanded to include the care of orphans at St Monica’s Home.

In 1910 the sisters established a nursing school in Sioux City, graduating approximately 900 registered nurses through 1972. Sisters were also sent out to staff two other hospitals—St. Benedict’s in Sterling, Colorado (1927-1960) and St. Ann’s in Algona, Iowa (1967-1972). In 1977 St.Vincent’s Hospital merged with the Sisters of Mercy’s hospital to form Marian Health Center.

In 1952 Bishop William P. O’Connor of the Madison Diocese invited the sisters in Sioux City, Iowa to start a girl’s high school in Madison, Wisconsin. Three sisters arrived in Wisconsin in 1953 and purchased 43 acres of open pasture land overlooking Lake Mendota and the city of Madison. The land contained a small oak forest and a 10,000 year old glacial lake. Here we built a priory—our new home. In the fall of 1959, we opened the Academy of St. Benedict, a women’s preparatory high school staffed by our sisters and other teachers from the local area.

The impetus of Second Vatican Council and its documents (1962-1965) opened the doors of the Catholic Church to dialogue with Christians of other traditions. At our priory in Madison, we welcomed monks from the ecumenical community of Taizé who were in residence at the University of Wisconsin-Madison. The monks and our sisters came together to lead weekend retreats for university students at the priory. We also extended hospitality to a local group of religious leaders known as the Madison Interfaith Dialogue. Each time they met at the priory they joined us for midday prayer and conversation. The sisters and the Dialogue members began discussing the possibility of an ecumenical retreat center, noting:

“As the result of Vatican Council II, the atmosphere of Dialogue with proper study, contemplative prayer, and increasing understanding of each other seems to indicate the need for an Ecumenical center near this city of prominence in higher learning.”

Through conversations and prayer our sisters heard a call to a new ministry. In 1966 we closed the Academy and re-opened our buildings as St. Benedict Center, an ecumenical retreat and conference center, offering a place of hospitality to a wide range of groups.

The Lutheran Summer Institute for Mission began holding a six-week program at St. Benedict Center in 1972. This program was designed to provide pre-service orientation for those called to one of the Lutheran missions throughout the world. Up to 50 participants and their families came each summer, representing a range of ages and backgrounds. As they joined us in prayer and meals and we attended their services, the Institute had a major impact on us, helping to form the ecumenical heart of our community.

The sisters began exploring new forms of monastic community in the 1980s: Community of Benedict was followed by the Bingen Community. Both communities welcomed women and men, single and married, from a variety of Christian traditions. Community of Benedict met together regularly for prayer and spiritual growth; Bingen Community lived  on the monastery grounds. In 1984 we established the St. Benedict Center Community Council to assist the sisters’ community with recruiting new sisters, establishing new forms of ecumenical community, and acquiring, maintaining and developing resources needed to make the retreat and conference center self-sustaining.

These experiences raised the question for the sisters: are we being called to form an ecumenical monastic community of Benedictine sisters?

To answer this question we began a visioning process in 1992. We invited Benedictine women and men and ecumenical religious leaders to discern with us our future life and ministries. Our vision of an ecumenical community, including women from any Christian denomination as members, came from these conversations. An ecumenical board was formed in 1994 to help guide the formation of this community.

Our vision became a reality in 2006, with our re-founding as Benedictine Women of Madison, the first ecumenical Benedictine community of sisters in the US. We affirmed this new community with an ecumenical celebration in 2007 attended by Abbot Primate Notker Wolf, OSB, the leader of the Benedictine order world-wide.

Becoming a community of communities

The Sunday Assembly worship community at Holy Wisdom is an extension of our ecumenical vision. Sunday Assembly is an inclusive and welcoming worshiping community, serving nearly 200 people each week. We are formed by the Word of God, the breaking of bread, concerns for social justice and peace, works of charity, and care for the earth.

The Oblates of Holy Wisdom Monastery was established in 1999 as an intentional ecumenical community of women and men. The members, who come from varied faith backgrounds, meet together at the monastery to learn about Benedictine spirituality. They live out this spirituality in their daily lives beyond the monastery.

The Friends of Wisdom Prairie, established in 2014, is the newest community at Holy Wisdom Monastery. Friends are women, men and families who share our commitment to care for the earth. They enjoy our natural setting, serve as environmental volunteers, support our environmental work financially, learn more about caring for the earth and share that knowledge with others.

Welcoming all with Benedictine hospitality

Benedictine communities are known for their hospitality. Since 1966 we have welcomed and provided accommodations for personal retreatants, small groups and larger gatherings in our retreat and guest house. Guests are invited to join the community for prayer throughout the day. We also engage our guests in conversation over meals and take time to make sure that “all are welcomed as Christ” (from the Rule of Benedict).

Benedictine stability fosters our care for the earth

We Benedictines are at home where we live, pray and work. This stability fosters a deep commitment to caring for the earth. Beginning in 1996, we worked to restore approximately 100 acres of land to native prairie. We have recovered a glacial kettle lake and preserved woods, wetlands and effigy mounds. In 2009 we dedicated our new ‘green’ monastery building. The monastery buildings with solar panels and the grounds serve as an educational resource and example of how to care for the earth, demonstrating practical and spiritual aspects of reverence for all of creation. This is our home and we joyfully share it with others.

History is never static, and so we continue to grow and change. We invite you to find your place at Holy Wisdom Monastery and become part of that change. Learn more.

Images from our history:

Prayer with Brothers of Taizé, 1966

Lessons on the prairie