Music filled the darkened performance hall. An attentive hush fell over the audience as the lush strains of Sergei Rachmaninoff’s Symphony No. 2 in E minor drew us together in wonder, a fellowship of listeners. For a few brief and precious moments, all of these strangers in a room made up one marvelous whole, separate but together, rooted in place yet soaring at the same time. 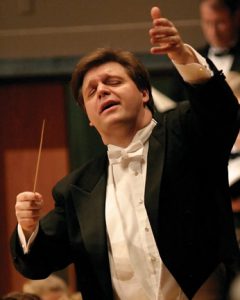 It was Saturday night, and Sister Tammy Shoemaker from Saint Benedict’s Monastery in St. Joseph, MN and I were treating ourselves to an evening out with the St Cloud Symphony Orchestra. As we took our seats in the concert hall, I was surprised to recognize some of the musicians in the orchestra: one of the Saint John’s monks in the cello section; one of my spiritual directees among the violins. As the music began, the guest conductor, Eduard Zilberkant, nearly lifted off the dais as he swung his arms and body to the passionate swells of Rachmaninoff’s muscular composition.

At the close of the concert, an enthusiastic standing ovation marked the gratitude of everyone in the room. It had been an especially inspiring and nourishing evening for me, during a time in which I have felt both helpless and hopeless about our ability to find unity in the midst of our differences.

The days leading up to presidential elections have felt crazy-making. The ratcheting levels of hysteria, fear, despair and outright predictions of apocalypse from both sides of the aisle has made it difficult to take in media coverage. For better or worse, this election cycle has revealed deep-seated, oozing wounds in this country which will require time and determined skill to heal. It doesn’t help that the often brutal and broad rhetorical brushes with which we paint one another mostly serves to build walls that seem insurmountable.

But on Saturday night, it suddenly crossed my mind that the auditorium was filled with all kinds of people—people who probably do not agree on most things—and yet for those brief moments in a concert hall were bound together by a force greater than any one of us could generate on our own.

There is a kind of fellowship that beauty unfailingly inspires. I have seen it happen over and over, but the miracle of it has struck me anew in this season. Knitted together in wonder, our human defenses seem to fall away in the disarming presence of beauty. What is it about music that creates community out of strangers?

As part of my work this fall, I’ve begun a graduate assistantship with Professor Bill Cahoy, Director of the Lilly Community Fellowship Program and former dean of Saint John’s School of Theology and Seminary. The Lilly project is bringing together academics, pastors and community leaders who have been pioneers in community and congregational development. One of the most surprising things I’ve observed in our gatherings has been the power of beauty to draw a group together. One group of professionals started and ended by spontaneously singing the old African American spiritual, “Guide my feet, Lord, while I run this race.”

Acapella, their voices had a poignancy and vulnerability that surpassed the prayers we had prepared on paper for the meeting. Another group of pastors spent time talking about the role of creativity, music, art and beautiful space in supporting congregational life, and the detracting influence of its opposite: trite music, cheap art, shabby space. The passion and insight these pastors displayed in service of their communities continues to inspire me to my own work and calling.

These graced moments give me hope. To be where community forms, however fleeting and brief, is something to celebrate. In a season when I can easily give into depression and hopelessness about our divisions, I cannot risk forgetting the enduring power of beauty to bring us together.
________________________