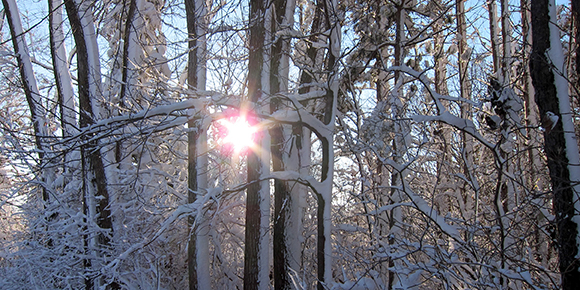 A Visit From St. Ben

Twas the night before Christmas, when all thro’ the HWM
Not a creature was stirring, except the nocturns;
The seeds were flung around with care,
In hopes that St Ben soon would be there;
The plants were nestled all snug in their beds,
While visions of spring were coded in their DNA.

I apologize for the cheeky editing of ‘A Visit from St. Nicholas’. What I was trying to address was the question of “What does a Benedictine Monastery have to do with caring for the earth?” I guess I was trying to work in something about winter too, since these are the Winter Nature Notes. Regarding the winter thing, Christmas and the Winter Solstice nearly coincide. But what does St. Benedict have to do with HWM (Holy Wisdom Monastery) and its care for the earth? I read that Benedictines have a very long tradition of caring for the environment; however, I had a hard time putting my finger on something written about this.

I recently found a wonderful statement on the subject in a blog post from a student at William and Mary, by the name of Greg (a good name for sure) who was doing a research project on this very subject. He had been reading “And God Saw That It Was Good: Catholic Theology and the Environment” by Hugh Feiss, OSB. Greg says: “Feiss focuses on several aspects of the Benedictine lifestyle which inform how Benedictines view nature. The first of these is “stability”—because Benedictines remain in their monasteries and, especially in the past, have often been self-sufficient there, it is particularly important that they not “foul their nest,” or worse, destroy it entirely. They instead must have the common good of the monastery, both present and future, in mind whenever they cultivate the land or cut trees down. Another part of the Benedictine viewpoint is a sense of humility before the work of God in all of Creation, even the ordinary things. The Rule enjoins humility on all the monks (and sisters), claiming that humility is the only proper attitude in the presence of God. Going along with this, service and work are honorable, but control of others is dangerous even in those whose positions make it necessary. All of these aspects of the Benedictine life, while not directly linked to man’s relationship with the natural world in the Rule itself, are nonetheless clearly prone to leading a monk toward an attitude of loving care for the natural world in which he sees the imprint of God.” He goes on to say about Benedictines “…dealt with theology, including the notion that Man is a microcosm of the entire Creation and is entangled with the rest of Creation so that he can never be separated. The actions of people thus affect the rest of Creation, which serves humanity, its head, while still glorifying God in its own right. This theology (which as far as I know is not specifically Benedictine, and much of which may have predated Hildegard) gives rise to a couple points. First, Creation is seen as something which humans in some way have a responsibility for, and second, it is inherently good. These points, when combined with the kind of virtuous life a Benedictine is supposed to lead, will allow a reader to come up with the specific kinds of actions toward nature demanded by the Benedictine viewpoint, even though they are not laid out in the article itself.”

It is interesting to observe that “the notion that Man is a microcosm of the entire Creation and is entangled with the rest of Creation so that he can never be separated,” is reflected in that wonderful quote from A Sand County Almanac by Aldo Leopold (aka St. Aldo in some secular circles) when he said: “When we see land as a community to which we belong, we may begin to use it with love and respect.”