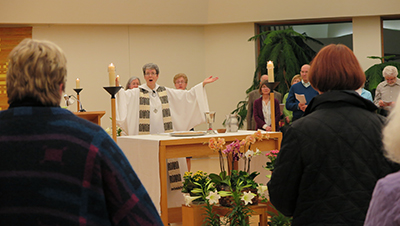 One of the experiences that profoundly shaped my life as a sister at Holy Wisdom Monastery was the listening sessions we held in October of 2005 with members of Sunday Assembly to hear your input and concerns about the future of Sunday Assembly. The issue we were grappling with was how we would conduct Sunday worship as an ecumenical community.

The sisters had discussed this matter for several years with our Ecumenical board. We laid several options on the table. Each sister could go to her own denominational church. We could go as a group to churches of various denominations as an ecumenical presence. We could have worship at the monastery according to different Christian traditions on a rotating basis. We could have the service of the word without Eucharist, or we could have an ecumenical Eucharistic service. Through discussion, we sisters had eliminated some of those options for ourselves. We wanted to hear what people in Sunday Assembly desired. Did you want to stay together or go back to your parishes? Did you want to go back to the Roman Catholic mass “by the book?” Would you be willing to move toward an ecumenical Eucharist without a Roman Catholic priest?

On three Sundays in October 2005, we allotted as much time as was needed to hear everyone from Sunday Assembly who wanted to speak. A total of 46 people spoke during those listening sessions and more sent their thoughts in writing. The overwhelming desire was to continue using inclusive language and to allow women and men to offer the homilies, to continue to welcome LGBT folks. Again and again people spoke about how much it meant to them to feel included and to include all God’s people. You wanted to continue being active participants in the liturgy.  You wanted worship where the place of women was honored. You wanted worship that inspired you in your work for social justice. So many of you told us you could not go back to the parish–of whatever denomination. I was moved to hear what Sunday Assembly meant to you. I couldn’t go back either.

In February 2006, Sisters Mary David and Joanne visited Nathan Mitchell, former Benedictine monk and then liturgy professor at Notre Dame, to discuss the various options for the liturgy at the monastery. One of the things he told them was “Don’t abandon liturgical prayer or the liturgical celebration of the Eucharist of the Benedictine community.” He also said, “Don’t abandon the Sunday Assembly you have built up.” After worshiping with you for eight years and hearing your expressions of commitment and gratitude, I knew I could not abandon you. I could not abandon anyone who wanted to come to the monastery to worship. All of us sisters felt the same way. We all were committed to work out what that would look like as we became an ecumenical community.

I’ll share one more experience I had soon after we moved into this building. One Sunday as the presider raised the bread during the Eucharistic prayer, I caught sight of the bread and the people across the Assembly room at the same time. I thought, “Here is the Body of Christ – in communion, in the Word, in the assembly.” We are the Body of Christ committed to going into the future together to love and serve our God and one another. For this I give thanks to God.