Homily for the Third Sunday of Lent:  Reflections on Exile and Figs, Manure and Potatoes 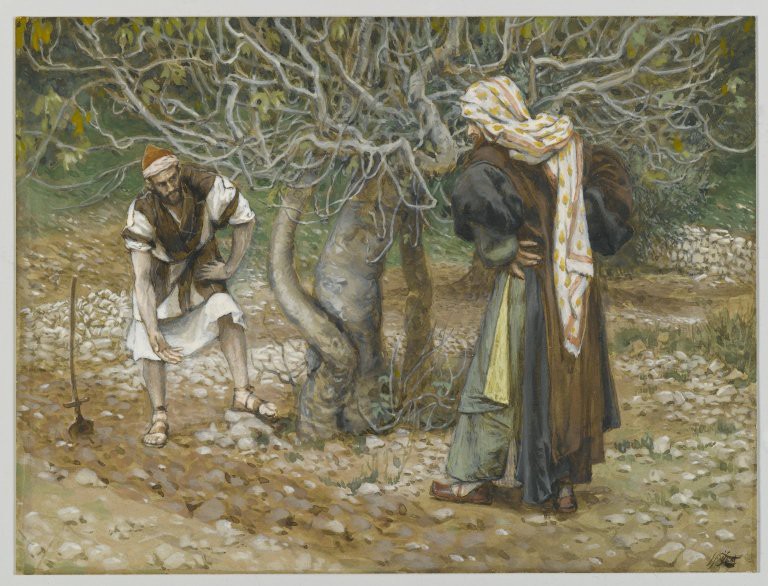 I mentioned to my twin that I would be preaching today. His response was that he saw it as very fitting since the central metaphor of the Gospel is manure.  Actually, he wasn’t quite that polite.

The first reading is one of those that I came to love the very first time I heard it. And, as I learned more about it, I have become even more impressed with its power and depth. It was written by someone we have come to call Deutero Isaiah, since the original “Isaiah, son of Amoz” who lived and wrote more than a century before clearly cannot have authored it. Was it someone who was seen as a disciple of the prophet or a school that gathered around the original?  Or, do we come to know the author as Isaiah because of some historical accident that bound the writings up with these and other later writings.  It’s impossible to know and, frankly, it really doesn’t matter that much.

What is important is the remarkable vision and insight displayed by this “2nd” Isaiah.  These words were first proclaimed to a Jewish community living in exile around the beginning of the 6th century BCE.   The Babylonians had invaded Judah and sacked Jerusalem three separate times over 15 years. Each time, they had rounded up the political and religious elite, put them in chains and herded them like cattle back to Babylon. Many would not survive. Those who did were settled into communities along the river where they tried to preserve what they could of the memory of a distant and beloved homeland.

And here’s the amazing thing. Looking around at this desolate, sometimes despondent community‐in‐exile, the author sees not the destruction of a people, but their rebirth. In this time, when to many God has seemed so absent, this second Isaiah dares to believe that God is closer than ever, ready to respond when called upon.

Incline your ear and come to me; listen so that you may live

Seek me, while  I may be found, call upon me for I am near;

…let them return to the Most High…and to our God, who will abundantly pardon

And yet, the prophet had it right. The community Isaiah II addresses, would fundamentally re-imagine Judaism. It would give birth to a Judaism no longer rooted in the cult of a small state on the banks of Jordan River but in the Law. It would be a faith that could endure and flourish in a people scattered throughout the whole world. That community in its learning and wisdom would enlighten the larger groups surrounding it for millennia.

The gospel reading provides us with a beautiful, simple little parable: the parable of the barren fig tree. It’s a parable in which most interpreters insist on trying to make God the impatient vineyard owner. And that does make some sense. However to do so, and thus turn it into just one more piece of the “repent-­‐or-­‐else” literature, misses the main point of the story. As I imagine this story, God is the gardener.

The God I imagine in this parable looks just like my late father‐in‐law, Paul Didion, in his gardening attire: faded jeans, ragged t-­shirt, seed cap and rubber boots. He is a one of those souls who is nowhere on earth as happy as in his garden.

And, like all true gardeners, this God is an incorrigible optimist. Always ready to try something new, always hopeful about the results. I remember one experiment in particular of Paul’s involved planting potatoes. He had carefully and with considerable hand labor set up several stacks of 4 or 5 used tires, carefully filling each with soil and planting the eyes in the upper tires. The potato plants at the top were lush and green. According to theory, the roots of the potatoes would have grown all the way down through the stacks with an abundance of tubers to be found in each and every tire as we un-­stacked them one‐by-one.

So, imagine our disappointment as Nancy and the kids and I help carefully deconstruct each stack, sifting the loose soil and, at the end of about two hour’s work, we have around a dozen potatoes ranging in size from marbles to tennis balls. But, what I remember most vividly about the experiment was Paul’s response. “Must not have mixed in enough compost. We’ll get it right next year.”

Today we are reminded that God is such a gardener. Maybe so far this Lent our figs have been more sparse and puny than we would have hoped. We are tempted to abandon the whole damn project. For crying out loud, we could probably buy figs in the supermarket a whole lot cheaper anyway.

But God nudges us gently. Be patient. Let’s nurture this little guy a bit. Hoe around it with prayer. Provide it with a little more nourishment—a rich compost of fasting and good works. That is your work, God tells us.

The figs, She reminds us, are her work. And, sometimes, like in today’s first reading, the fruit may be present in far greater abundance than we, at this moment, can realize.