Saturday, January 21, 2017, is a day that I will remember for a long time. The day after the presidential inauguration, I woke early to join a group of women that I had been meeting with regularly to head into Minneapolis. When we got to the Twin Cities, we planned to rendezvous with other friends from Saint Johns School of Theology carpooling for the Women’s March. No one knew what to expect, but in the car we ventured our guesses. Maybe 10,000 or 20,000 would show up for the march? Who knew? What I did know was that in Madison, Sisters Mary David Walgenbach and Lynne Smith would be marching; in Chicago, Novices Denise West and Paz Vital; and, in Saint Paul, I would be marching. I drew strength from knowing that. Although the Benedictine Women of Madison would be spread out in three different cities, we would be marching together as one community. 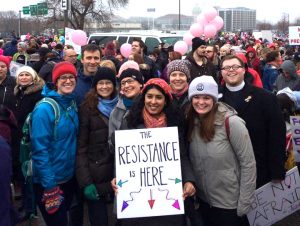 On the way down in the car, my group of women caught up on each other’s lives, shared hopes, encouraged one another. I was grateful to be travelling with these particularly courageous and strong women. On the sign that I made to march under, I’d chosen a quote from a New Year’s Eve Watch Night sermon by Valarie Kaur: “What if this darkness is not the darkness of the tomb, but the darkness of the womb?”  It had given me chills when I’d first heard it, inspiring me to remember the tenets of my faith. Yes, death precedes every resurrection. On the other side of my sign, I’d carefully drawn arrows with the words: The resistance is here.

I didn’t know it at the time, but in cities throughout the nation and the world, the same thing was happening. Citizens were gathering. Neighbors were sharing their hopes and dreams. People were making signs, knitting hats. Human beings together were connecting and finding hope. Women and men and children were marching together in solidarity, an intergenerational surge of peaceful protest.

Arriving in Minneapolis, I was quickly stunned by what I saw and heard. Organizers had asked everyone to assemble by 10:30 am in St. Paul, so that the march to the Capital Building could begin at 11:00 am. We had arrived on time only to see that thousands more had arrived even earlier. People thronged the area as far as I could see, and I was overwhelmed. Excitement, joy and hope filled the air as pockets of people began to sing, “We shall not be moved.”  Strangers started conversations with each other, celebrating each other’s signs. Many stopped to take photos of their favorites. Through the miracle of social media, we all became aware of one another—pictures were quickly posted from all around the world. I had never been a part of something so large, so momentous and full of life. Later, I would learn that 100,000 marched in Saint Paul; 100,000 in Madison; 250,000 in Chicago. Millions together across the world marched in support of a larger, more inclusive vision of America.

As the daughter of Indian immigrants, a trained criminal defense trial lawyer and a theology student, I knew that marching was an important way for me to live out the convictions of my faith and work. The divisions in our country are deep, but what I saw of the Women’s March on Saturday, January 21st, throughout this country and around the world, continues to feed my hope and faith. God is good and so are the people God made. Despite our differences, we will find a way together. The miles that separated my Benedictine community, in three different cities, didn’t keep us from marching alongside one another. May it always be so.

Where were you on this momentous day? Please share your stories with us via comments, below!