Two cardboard boxes at our house have started to slowly fill with items for a local charity. In many households, it is a Lenten practice to examine overfull closets and donate what isn’t needed. But initially, I mourned to myself: “I’ve got nothing to give.” Only six months ago, I had carefully packed and shipped five boxes from NYC, just enough (I hoped) to carry me through the Sojourner experience. The process of moving, of picking up my life and relocating, forced difficult choices. How many of these heavy books do I really need? Which of my favorite clothes can I do without? How much is enough?

Few people talk about the pain of discernment. There is a hard reality in discovering that you have to leave some things behind, in order to go forward. Among the spiritually adept, the maxim travel lightly is not only good advice—it’s a way of life. The commitment to live into God’s will necessitates tough choices. Every genuine “yes,” requires that I say “no” to some very good things that have served me well over the years but are no longer needed for the journey.  As I grow older, I realize that I can’t keep all my options open. When I make choices, when I make commitments, some doors close—sometimes forever. 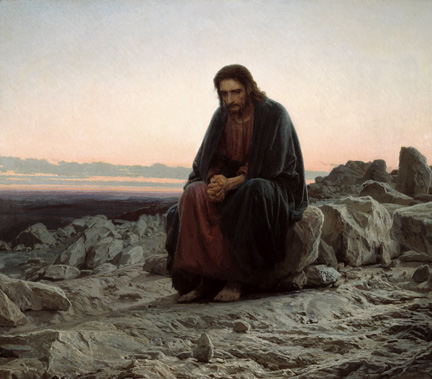 This Lent, I have been meditating on the painting (above) Christ in the Wilderness by Russian artist Ivan Kramskoi. His poignant rendering of Jesus in all his humanity—vulnerable, hungry, cold, ragged and tired in the chill light of dawn—speaks powerfully to me in this season.  His eyes are puffy, rimmed with red. His forehead is furrowed in resolute concentration. Alone, he faces the night, with his back toward the rising sun against an unyielding backdrop of stone. How long has he been sitting there? Jesus’ hands are clasped tightly, desperate in prayer—an unmistakable bookend to the night he will endure, much later, at Gethsemane before his execution.  This is not a pretty picture. This is Christ in discernment, in the flesh, wrestling with temptation and clarifying the truth of his call.

When it exhibited in Moscow in 1872, Kramskoi’s painting created a stir. The choice to depict Christ without a halo, his face exposed and fully embodied, was controversial, even heretical. At a time when the fashionable art world flocked to Paris and Impressionism was the rage among young painters, Ivan Kramskoi had made the defiant choice to stay in Russia and paint portraits with a restrained realistic palette of color. In defense of this painting, he wrote:

“There is a moment in the life of every man who is however slightly or greatly created in the image of God, when he is in a quandary—whether to take a ruble and deny the Lord or not to yield one step in the direction of evil.”

For this artist, the choice to create and exhibit this painting mirrored Christ’s own struggle in the desert against temptation. During the nearly ten years that it had taken him to complete it, Kramskoi seems to have drawn the strength he needed to emerge with Christ from the wilderness, now more firmly convinced of his own mission in the world as an artist.

And isn’t this at the heart of Lent? To sit with Christ in the difficult rocky places of our lives, accepting the necessary pain, so that we may emerge more firmly convinced of what we absolutely need—and what we can leave behind. Lightly and freely, we may then, as Benedict charmingly says, “run on the path of God’s commandments, our hearts overflowing with the inexpressible delight of love.”

Image of Christ in the Wilderness by Ivan Kramskoi, courtesy of WikiCommons