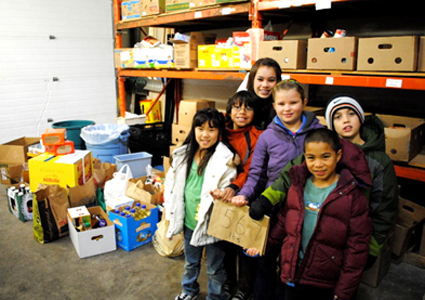 For where two or three are gathered
in my name, I am there among them.
-Matthew 18:20, New Revised Standard Version

There was a time when it was rare to see any children at Sunday Assembly worship at Holy Wisdom Monastery. About three years ago, a few volunteers went out on a limb to launch a children’s ministry here, possibly relying on the sentiment of this scripture from Matthew. Now the ministry grows dramatically each year.

Children’s ministry began in 2009 with the vision of a few Sunday Assembly members such as Barb Abbott, Sally Bowers and Rita Emmenegger, who didn’t have children of their own in this ministry, but saw a need for providing education and a space for young people. During the 2009-2010 school year, these three got the ball rolling with sessions every other Sunday in coordination with our director of worship and music, Lynn Lemberger. There were about a dozen kids enrolled that year.

For the 2010-2011 school year, these three volunteers passed the baton on to some committed parents who had children in the ministry, including Ann Baltes, Tara White, Barb Urmann and Barb Oswald. It continued twice a month as a completely volunteer-led program. An ecumenical children’s ministry curriculum was purchased from the Center for Progressive Christianity. The curriculum is unique because it is ecumenical. The curriculum isn’t focus on one doctrine from one denomination, but rather is very Jesus-centered and emphasizes ethics and morals for children to consider in their faith formation.

During the 2011-2012 school year, the ministry continued to grow and more Sunday Assembly members (parents and non-parents alike) got involved with the instruction. The ministry expanded into two groups: children’s ministry for kids ages three to eight, and youth ministry for kids ages nine to 13. Lessons for the older students are from Faith Practices, published by Pilgrim Press, and focus on the topics of hospitality, praying and living joyfully and stewardship. The enrollment doubled to about 26 regular children participants. Some new families with children joined Sunday Assembly in part due to the offering of children’s and youth ministry.

In addition to the classes and lessons, the students and their families have organized a food drive every November. Last year a total of 567 pounds of food and household supplies were delivered to Middleton Outreach Ministry. Twice during the school year students are mentored by parents, teachers and a number of adults in Sunday Assembly and serve in various liturgical ministries for our Sunday worship. Students were greeters, lectors, cantors, instrumentalists and shared their talents and gifts leading the assembly in prayer and song.

I had a chance to sit down with several parents whose children participate in children’s and youth ministry:

We are pleased to announce the schedule for children’s and youth ministry for the 2012-2013 academic year! It’s a great way to connect with other parents and their children while participating in our ecumenical Eucharist services on Sundays at 9:00 am.