The bluebirds have returned for the season! Robins, the harbinger of spring have also arrived. The jonquils and daffodils are blooming, the trees are budding and the sisters have started working in the vegetable garden. Spring has arrived at Holy Wisdom Monastery and on what is now known as Wisdom Prairie.

“In the spring, we orient ourselves toward God’s creation – the sunlight, warmth and rain – after being inside all winter. A new season bursts forth,” said Paul Boutwell, groundskeeper and restoration ecologist. 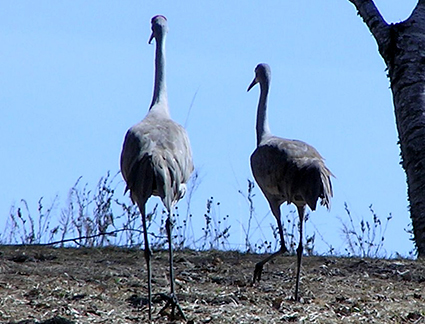 Sandhill cranes strolling up to the Mendota Prairie overlook.

In addition to the welcome sight of the bluebirds, the prairie meadowlarks have returned. “They have a really unique song which is used for mating or to let other birds know where their territory is located,” explained Paul. He recently encountered a great horned owl which flew from its perch in a tree to the ground in front of him. It extended its wingspan trying to scare Paul away. Prairie birds often nest on the ground, including the sedge wren and the yellow-throated warbler.

Many of the birds are moving north to Canada at this time of year and make a stop at Wisdom Prairie until the weather warms up further north. Bufflehead ducks enjoyed Lost Lake for two weeks in April. With the lingering cold weather and snow up north, migrating birds may be here awhile longer than usual. The prehistoric-looking sandhill cranes can be heard often making their loud trumpeting call.

In addition to all the bird sightings, the 13-lined ground squirrels, also called Wisconsin prairie dogs, have emerged from hibernation. They look much like a chipmunk only bigger and enjoy standing on their back legs to get a better view of their surroundings. Deer, fox and coyote are also more active now that the weather has warmed up.

Paul has worked at the monastery since 1990 and has been through both droughts and rainy seasons. The drought that Wisconsin experienced last year was the worst he has seen. “It’s hard to know what will happen with the prairie plants. It could weaken some of the plants so they don’t come back or they won’t have as much resilience as before.”

Paul added that some of the perennial prairie flowers didn’t produce seed last year because of the drought. “Birds, animals and insects depend on the seed source for food.” Paul said there is a huge relationship between all of the species. “There’s a co-dependency, a symbiotic relationship to help support each other.”

With the almost six inches of rain received in April and the several inches of snow in March and April, the drought has officially ended. Paul said that new growth will happen in many areas of the prairie, though he noted that some of the wetland plants around the two water detention basins constructed near the monastery might not come back because of the drought. Invasive species such as canary grass and garlic mustard could start to take over in these open areas.

In May the prairie is still dormant. If you get down on your knees and look closely you could see some green under the tall brown grasses. “The prairie doesn’t really get going until June,” explained Greg Armstrong, development associate. “You should simply enjoy observing the changes that take place at this time of the year. The prairie is just beginning to green up with new growth peeking out from the death of last season.”

The sisters at Holy Wisdom Monastery are devoted to the prairie and care for the earth practices for the long haul. The ongoing prairie restoration work of nearly 100 acres provides a benefit to nearby Lake Mendota. Wisdom Prairie helps prevent soil erosion and run-off into the lake because of the deep root system of the prairie plants. The prairie acts as a filter and can absorb seven inches of rain per hour. The rain water carrying polluted run-off from nearby farms is filtered through the prairie and enters the lake much cleaner.

Spring is a great time to visit Wisdom Prairie. Guests are encouraged to take a walk on one of our four nature trails and witness the miracle of spring. Most likely you’ll see quite a variety of flora and fauna if you take the time to look.

Spring is the perfect time to visit Holy Wisdom Monastery for a personal or group retreat. Contact Jamie Dunbar atjdunbar@benedictinewomen.org, 608-836-1631, x100. If you would like to volunteer on Wisdom Prairie, consider attending one or more of our monthly Community Workdays, May 18, June 22, July 20, August 20, September 21, October 19 and November 2, 2013. Sign up online or contact Jill Carlson at jcarlson@benedictinewomen.org, 608-836-1631, x108.