Download a PDF version of this article with color photos. This article is reprinted with permission from Sojourners, (800) 714-7474, www.sojo.net 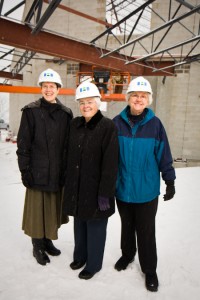 Benedictine women in Wisconsin are practicing new (and ancient) ways to save the earth, starting with the home front.

New growth has a history of springing to life at Holy Wisdom Monastery in Madison, Wisconsin — and that’s just fine with the Benedictine sisters there.

The ancient Benedictine motto “succisa virescit” (“cut down, it ever grows green”) is appropriate for a monastic tradition that has survived more than 1,500 years of church history, rooted in stability, yet ever adapting. For the members of Holy Wisdom Monastery, it’s a motto that rings particularly true. “If Benedict were living, would he insist that everything be done just the way it was done in 480? Hardly,” laughs Sister Joanne Kollasch, OSB, who has seen plenty of change since she joined the community almost 60 years ago.

In 1998, Holy Wisdom became the first Catholic monastery in the country to become ecumenical, extending full membership to single women of all Christian traditions — not just Roman Catholics. And in 2010, their new monastery became one of the greenest buildings in the nation, earning Platinum LEED (Leadership in Energy and Environmental Design) certification from the U.S. Green Building Council — an honor awarded to less than 5 percent of LEED-certified buildings.

From the “green” roofs to the 100-percent recyclable carpet, every nook and cloister of the building embodies the women’s commitment to “use what we need, but not more than that.” High-performance windows and solar tubes grace interior spaces with bright, natural light, while photovoltaic panels generate 15 percent of the building’s energy. Buried 300 feet beneath the parking lot — which is itself lit by solar-powered lights and paved with runoff-reducing cement — 39 geothermal wells harness the earth’s natural temperatures to provide the monastery with efficient, year-round heating and cooling. And when the weather outside is pleasant, the central air shuts off and automatically sends an email to the occupants, inviting them to open their windows.

Additionally, the sisters made sure that the “green” was in the process, not just the end product. Instead of demolishing the old building and carting the mess to the dump, the sisters began their earth-honoring commitment by carefully deconstructing the old building so materials such as fiber optic cables and organ pipes could be reused. “As we took the building down with care and reverence, it prepared us to put up a new building with the same care and reverence,” says Sister Joanne.

Like most Benedictine values, this spirit of “reverence for all things” can be traced back to the Rule of St. Benedict. Written in the sixth century, this “little rule for beginners” outlines a pattern for monastic life emphasizing prayer, contemplation, stability, and balance. So when Benedict instructs that all things should be treated “as sacred vessels of the altar,” the sisters of Holy Wisdom took the advice seriously: Fully 99.75 percent of the old building was recycled or reused, diverting a whopping 8,628 tons of would-be waste from landfills.

Still more impressive was this: The project was completed under budget, coming in at $241 per square foot. That’s significantly less than the $366 per square foot cost averaged by other Platinum LEED-certified buildings. As explained by Sister Mary David Walgenbach, OSB, who entered the monastery in 1959, the sisters were simply determined to build “a green monastery in a very red economy.”

The community at Holy Wisdom began long before anyone heard of geothermal heat or recyclable carpet. In the 1950s, a group of Benedictine nuns moved from Iowa to Wisconsin to open a Catholic high school for girls. For the sisters, it was “a classic model” of Benedictine monasticism, complete with black wool habits and Latin Mass. “I’m grateful for that period,” says Sister Joanne, “It was simple: pray, work, recreation, time for lectio divina.”

Then came Vatican II, a monumental shift in the Catholic Church, when many of the antiquated practices — like saying Mass in Latin or having the priest face the altar — were set aside in preference for the renewal of the Catholic faith in a new era. Monastic communities were given the freedom to experiment by returning to their founding charism and discerning what their community should look like in the future. “We were breaking out of an old structure that held one pretty tightly and trying to find our way into a new church, especially for women,”says Sister Mary David.

Emboldened by this spirit of renewal, the sisters closed their school in 1966 and converted the building into an ecumenical retreat and conference center, inviting Christians — and people of all faith traditions — to pray together.

This was a conversion moment in the life of the community: “They would come here and have their meetings or retreats and we always asked them to pray with us or we prayed with them,” says Sister Mary David. “That’s what changed our hearts to be ecumenical.” Through the daily experiences of sharing conversation, meals, and prayer with other Christians, the sisters — “gradually, gradually, gradually,” they insist — found their hearts becoming “converted and more open.”

And they wouldn’t have it any other way. “You become so edified by other people’s commitment and their lives,” says Sister Joanne, “it is not possible to become this ecumenical without experiencing the good faith of other Christians.”

Ultimately, the sisters were called to open up their own community to receive Protestant women as full members. “That was a big step,” says Sister Mary David, “because we were Roman Catholic sisters regulated by canon law.” With a healthy dose of persistence, the sisters succeeded in transferring their governance from the Vatican to a federation of other Benedictine communities — a process that took more than 10 years.

But their patience paid off. “I saw ads about this community, and the line that caught my attention was ‘We welcome women of any Christian denomination,'” remembers Sister Lynne Smith, OSB, a Presbyterian minister. “I thought, ‘Oh! That could mean me.'” In 2000, the sisters welcomed Sister Lynne as the community’s first Protestant member. As Sister Lynne simply puts it, “I came and felt at home.”

Today, Holy Wisdom Monastery is home to three sisters and one associate member who live at the monastery and have promised to follow the Benedictine way of life, as well as a handful of women who are discerning potential monastic vocations. Holy Wisdom is also home to a thriving oblate community, a group of more than 170 people from all traditions — including women and men, single and married, lay and ordained — who live outside the monastery but “find a practical spirituality” in the Benedictine tradition. As oblates, they commit to incorporating the Rule of Benedict into their daily lives and to coming to the monastery for times of prayer and spiritual formation.

On a typical day, you’ll find sisters, oblates, and community volunteers all working together in the apple orchard or praying the liturgy together in the oratory. “The place was so dynamic,” says Sister Lynne, remembering one of her first days at the monastery, when more than 100 people joined the sisters to help reseed their prairies with native plants and clear paths in the woods. “They bring their energy and we give our energy,” she adds. “That’s a lot of the experience here.”

Though this dynamic community has changed since the 1950s, the sisters are still very connected to the Benedictine tradition. “Time after time in the Rule, Benedict says, ‘This is the arrangement for prayer, but if you have a better idea, then that’s what you should follow,'” explains Sister Joanne. Benedict teaches Christians a pattern for accepting — and expecting — change. According to the sisters, this is the core of Benedict’s message for monastic communities. “We’re rooted,” explains Sister Lynne, “and the rootedness is in the gospel and in following Christ. And scripture is always calling us to further conversion — if we’re open to it.”

St. Benedict Rule contains no explicit “And thou shalt be green” command. Dedication to ecological sustainability grows naturally out of the Benedictine vow of stability. “Because Benedictines put down deep roots,” explains Sister Lynne, “we have a commitment to bettering the larger community where we are. And for us, that includes the land.”

And the sisters of Holy Wisdom certainly aren’t alone; from Rhode Island to New Mexico, monasteries of all denominations are caring for the earth as part of their monastic calling, adopting native plants, wind turbines, geothermal heating, solar panels, and even a herd of llamas in an effort to be better stewards of creation.

In the era of increasingly disastrous climate change brought on by our global fossil-fuel dependency, a couple of wind turbines and solar panels may appear insignificant. Yet Benedictine author Joan Chittister provides the reminder that Christians are called to be faithful, no matter how small the issue at hand. “Monastic mindfulness,” she writes, “recognizes that small actions are global in their scope and meaning. Benedictine spirituality requires all of us to go through life taking back one inch of the planet at a time until the Garden of Eden grows green again.”

Since 1996 — before Holy Wisdom had a Platinum LEED-certified building — the sisters have been quietly “taking back one inch of the planet at a time,” and partnering with volunteers and local organizations to restore the native prairie and glacial lakes on their land. To date, 95 acres have been restored. “Being so close to the land, it’s like the trees and the prairie and the garden are a part of the community,” says Sister Lynne. “We naturally want to care for it — it’s our home.”

Of course, environmental sustainability isn’t the only Benedictine value evident in the new building. Like the community that built it, Holy Wisdom monastery “weaves prayer, hospitality, justice, and care for the earth into a shared way of life.” So while the sisters are always happy to show off the green features of their monastery, they get most excited when, as Sister Lynne describes, “people feel quiet and awed and they want to go in and pray.” The spirit of Holy Wisdom is contagious: Standing in the assembly room, looking out at the trees and the prairie, you know, instinctively, that this is a place where deeper conversion comes to life. Or as Sister Joanne puts it: “Monastic space is a teacher in itself; through the lack of clutter, through the silence, through the simplicity, through the openness — that’s the point.”

Betsy Shirley is an editorial assistant at Sojourners.

PDF version of this article with color photos is reprinted with permission from Sojourners, (800) 714-7474, www.sojo.net