I’ve been reflecting on “presence” since Advent began. Paul Knitter’s homily of December 6, 2015 brought my musings into focus. Here is a line that caught my attention. “That Jesus will ‘come again’ in the future is not out there, on a horizontal line: rather, the future is vertically the depth of the present, that which is already here but has to be discovered, trusted, and realized.”

Benedictine spirituality calls me to see Christ in every person I encounter. I’m better at being present to that reality on some days than on others. Recent weeks have been full of opportunities for such encounters. 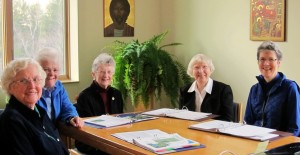 December 3-6, 2015, our community hosted Joella Kidwell, OSB, president of the Federation of St. Gertrude and Lorane Coffin, OSB of St. Martin Monastery in Rapid City, South Dakota. They came as official visitators for a friendly visitation that takes place every five years for the monasteries in our federation. We enjoyed their time with us. Sisters Joella and Lorane joined us for the Liturgy of the Hours while they were here and were impressed by the priority we give our liturgical life. We are encouraged by their final report which included ten commendations. Among the commendations was an affirmation of our ability to involve members of our various communities in the development of the monastery while still maintaining appropriate boundaries allowing the sisters’ community to flourish. They marveled at our ability and determination to listen to our various “communities”, to try new things, to let go of what is not working, to make adjustments and continue moving forward. “This is truly a gift of the Spirit,” they said.

The following week brought several gifts as well. On Wednesday, the monastery hosted the memorial service for Mary Babula. I did not know Mary, but after hearing her family and friends share their experiences of her during the memorial service, I felt as if she was present with us in the room. She will continue to be present in the hearts and lives of the childcare workers, advocates, children and families whose lives she touched. I left the memorial service feeling enriched by the strength and compassion of her life.

On Thursday, we hosted artist and journalist David Giffey for lunch and Reflections on Art and Prayer. We are privileged to host a display of David’s icons in the gathering space at the monastery this October through December. In his presentation, David pointed out something that other early Christian writers have noted.  The Greek word for icon means image or likeness. Since human beings are said to be made in the image and likeness of God, the original icon is a human person. I was moved by David’s gentle and humble presence as he spoke. I imagine his presence is born of his years of working for peace and his deep attentiveness to the creative process within himself.

At the lunch on Thursday I shared a little of my experience using an icon in prayer. Afterwards, a petite Greek woman stopped to tell me she appreciated my comments. She told me how important visual prayer with an icon or with creation was for her. Her eyes shone as she spoke. The words coming from her heart resonated within me. We had both been touched by a presence in prayer and now that presence was the connection between us.

It has been an exceptionally busy week, and I feel tired physically. But my spirit is renewed because of the encounters I have had. By God’s grace they have helped me discover the depth of this present “presence” among us.

Follow this link to read additional blog posts from Lynne in the series titled Building Community.