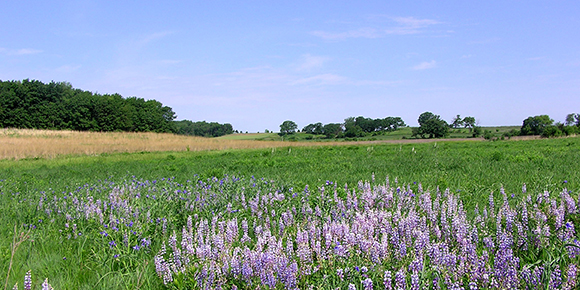 By Ron Endres and Will Mann

As you drive around Lake Mendota on County Highway M and pass in front of the Holy Wisdom Monastery property, you see two primary ecosystems: prairie (or fields that have been recently planted as prairies) and woodland. Prairie and woodland are wonderful ecosystems. If we finished constructing the prairies, cleaned up the weeds and hedgerows, did a bit of maintenance in the woodland, it would be acceptable to call the Wisdom Prairie project complete.

Prairies burned easily with an abundance of fuel.  These hot fires kept the woodlands from expanding into the prairies by killing the young hardwood seedlings. Woodlands were resistant to fire because the tree canopy shaded the ground and less fuel for fire was available. But some tree species, namely bur and white oak, as well as shagbark hickory, are resistant to fire. They thrived in a transition area between prairies and woodlands called savannas. Oaks were the dominant trees, hence the term oak savanna. The bur oak has several adaptations to fire including an extensive root system and thick, corky bark. A thick, woolly cap protects its acorns. Oaks not only tolerate fire, but their flammable leaves promote it. 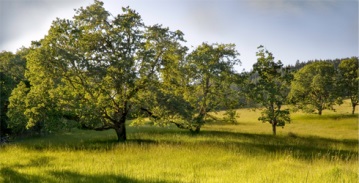 Oak savannas by definition generally have a minimum of one tree per acre and up to 50% canopy cover. It is a fire-dependent ecosystem distinguished by widely-spaced, spreading trees with a unique group of plants, mammals, birds and insects living below.

Oak savanna is one of the most threatened ecosystems in the Midwest. Less than 0.01% of the original 5.5 million acres of savanna is intact today.  Many things contributed to the near demise of oak savanna. First and foremost, absence of the use of fire allowed invasion by dense shrubs and trees as well as invasive species. These areas became full forests. Some savannas were cleared and developed for homesteads. Others were purchased and logged for railroads. Some with poor soils were grazed so heavily that all the native species eventually disappeared. 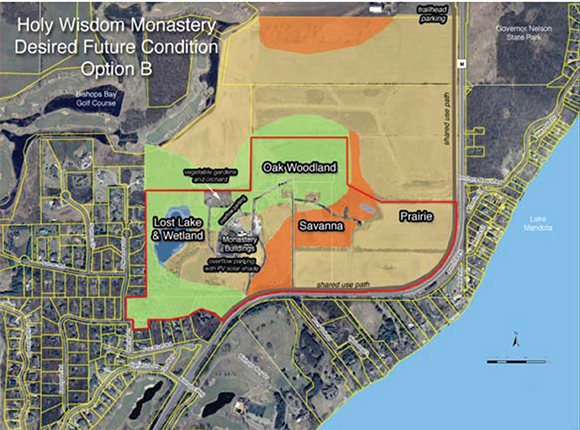 Holy Wisdom is planning the construction of an oak savanna for three primary reasons. First of all, after the hedgerows and unwanted trees and shrubs are removed, it would be highly desirable to have a screen between the highway and the houses on the monastery property. Secondly, an oak savanna would be visibly appealing, softening the transition between prairie and woodlands. Finally and maybe most importantly, it is the right thing to do. Restoring a threatened ecosystem is always a worthwhile cause.  It will more closely mirror the landscape and ecosystems present before Wisconsin was settled.

Planting an oak savanna will be a very long process. There are no oaks in the proposed savanna area. It will take approximately 20 years for a bur oak to grow to 20 feet tall. But it is worth the investment in time. A mature bur oak tree provides a storm water control service worth approximately $3500 and removes 19.56 pounds of nitrogen, sulfur, ozone and particulate matter every year (American Forests 2007).

Rather than being satisfied with the reconstruction of prairie and the improvement of the existing woodland, the visionaries at Holy Wisdom Monastery are looking far into the future and embarking on the development of a third ecosystem—one that has aesthetic, historical and ecologically proactive values.  With the long-term planning and hard work this will entail, there will be an oak savanna at Holy Wisdom to complement the prairie and woodland.

Join the Friends of Wisdom Prairie to help support the restoration efforts at Holy Wisdom Monastery or volunteer at an upcoming Wisdom Prairie Workday. For more information click on the links above or contact Greg Armstrong at 608-836-1631, x123.