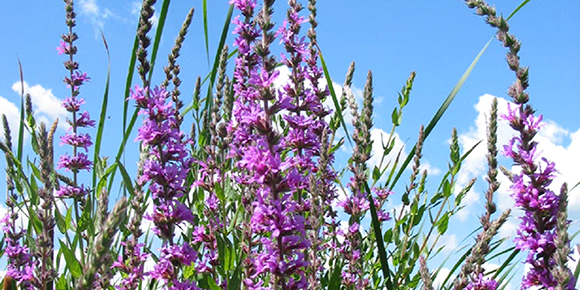 Wow! What a winter it has been. I can hardly remember a more persistently cold winter; and with plenty of snow. As I write this, we have just begun to break out of the Polar Vortex. You might think that the prairie plants would suffer a lot in this cold winter, but I think that for the most part they are just fine. The vast majority of species that live in the prairie are herbaceous perennials. This means they are not woody, but have soft succulent tissues and they persist for several years; often for many years. The tops, the stems and the leaves above the ground, die back in the fall, sending their stored energy into the stems and roots below ground. Most of them form buds just at the ground’s surface in the late summer and fall, and spend the winter as a clump of stems with buds and a deep root system attached. With this rather clever life form, the overwintering parts are either at the surface of the soil or under it. Here they are out of the wind and sun during times when they can’t take up frozen water. The temperature is moderated as well by the moist soil, and in most winters here, by a nice covering of snow which insulates these plants. The relatively soft buds at the soil’s surface can squeeze up a bit to accommodate the freezing and thawing without being crushed. An inspired design!

Spring will be with us soon. The snow will melt; the frost will thaw from the soil. The plants will start to grow from those buds at the soil surface. In their cycle of life, they will grow up with green stems and leaves which will photosynthesize, producing the food that they need to live. Also, most of them will produce flowers and then seeds, and disperse the next generation of their kind to perpetuate life in the prairie. Beautiful!

The spring will be mostly about the renewal of growth and putting out green leaves to manufacture food. There are a few prairie plants that produce flowers early in the season, but for the most part the flowers don’t appear until June and later. There are some very notable exceptions however, and I hope you will visit the monastery this spring to see some of them. Look and see if you can find lupine (Lupinus perennis), white wild indigo (Baptisia alba), golden Alexander (Zizia aurea) and shooting star (Dodecatheon meadia) among others. You can search the internet using the Latin name, and you will get lots of pictures and information before you come, if that would be helpful. Alternatively, you can send me an email, (Greg Armstrong) at garmstrong@benedictinewomen.org, and we can set up a time to walk around to see what is in bloom. I’m the environmental education guy.

It is interesting to observe that the plants that flower in the spring are rather short in stature, as the other plants around them have not grown up to obscure them from their pollinators yet. Progressively through the season, the flowers are held higher and higher to keep above the surrounding vegetation so they look attractive to the insects that pollinate them.

As many of you know, the sisters have recently purchased a 53 acre parcel of land adjacent to the existing monastery lands. This new parcel is mostly farm fields. A neighboring farmer grew corn on the land last season and will have soy beans this season. The sisters plan to restore prairie and savanna on this land after that, expressing the Benedictine virtue of seeing God in all things of the earth. The sisters have taken measures to facilitate this bold plan for living out their value of caring for the earth. First, they have organized a fund raising campaign called the Wisdom Prairie Project to help pay for the land and the cost of restoring prairie and savanna on it. Please donate if you can, by visiting our website or contacting Mike Sweitzer-Beckman 608-836-1631, x124. Secondly the sisters are creating a group to advocate and support the ongoing care for the earth efforts here. This group will be called the Friends of Wisdom Prairie, and once established, we hope you will become a member. I think you will feel good helping care for the earth while also having a good time. Stay tuned, we will launch the Friends of Wisdom Prairie after the Wisdom Prairie Project campaign is finished.

Recently I have been learning about Benedictine spirituality, as I wanted to understand the motivation the sisters at Holy Wisdom Monastery have to care for the earth. As it turns out, this idea of caring about the earth and all of its elements goes back to the very beginnings of the Benedictines; with Benedict of Nursia. The idea that God is present in all things is derived from the Rule of Benedict, his instruction manual for living a balanced life in a monastic community. Benedict’s instructions were to regard all utensils and goods of the monastery as sacred vessels of the altar. This attitude of treating the ordinary as sacred, this universal reverence, is lived out at Holy Wisdom Monastery. The sisters, and the members of the many affiliated communities here, adhere to the idea of universal reverence. Restoring the ecological health of the land at the monastery is an evident result of that reverence.