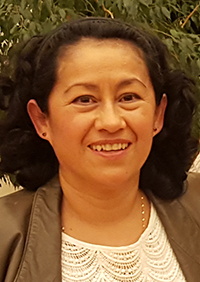 Growing up in Mexico, every year around this time everyone looks forward to major festivities. The Feast Day of Our Lady of Guadalupe is celebrated on December 12. It’s a huge celebration throughout the whole country which commemorates the appearances of the Virgin Mary to an Aztec man in the 16th century. The story is that Mary appeared to Juan Diego and sent him on a mission to have a shrine built in her honor. He hardly felt capable of achieving this task since he was an indigenous man and spoke Nahuatl, not the Spanish of the Bishop. At first the Bishop didn’t believe Juan Diego and he asked for a sign that he had truly seen her. Juan returned with roses picked from a hill that Mary sent him to, even though it was winter. When he brought the roses to the Bishop, he discovered that the image of Our Lady had appeared on his cloak. The Bishop was finally convinced and the shrine was built on the site of the appearances. Today the Basilica of Our Lady of Guadalupe stands on the hill of Tepeyac in Mexico City and is the most visited Catholic landmark in the Americas.

We, the whole neighborhood, start the Our Lady of Guadalupe Novena on December fourth. The neighbors take turns hosting evening communal rosary at their houses. After that everybody enjoys drinking coffee, tea or atole (a sweet, hot drink), with cookies or sweet bread. During these nine days each street hosts a street mass. The people decorate their front doors to indicate that they want the priest to stop by to bless their home and family after mass. Each family stands together at the front door waiting for the priest and the procession of people that attends Mass. On that day we have something special to eat, like tamales, and atole.

Some people make a pilgrimage to visit Our Lady in groups from their neighborhood. When I was a teenager, my older sisters and brothers and I joined about 40 young people in our area and made a pilgrimage. We walked from our neighborhood to downtown Mexico City where the Basilica is. Her shrine is at the Basilica on the top of a hill, where she appeared. We walked for 3-5 hours, then had mass and a special blessing, and returned home on the train. The Feast Day of Our Lady of Guadalupe is the most important day of celebration in Mexico after Christmas.

Las Posadas is a nine day celebration starting December 16 to commemorate the nine months that Mary carried baby Jesus in her belly. Posada means ‘lodgings,’ and for nine days the neighborhood re-enacts Mary and Joseph’s journey from Nazareth to Bethlehem in search of a warm place to stay for the night. Nine families volunteer their houses to celebrate the posada, while the rest of the neighborhood processes in the street carrying small colorful candles. We go praying and singing from one house to another, with two children chosen to play the parts of Mary and Joseph, until we arrive at the designated house. There, the host receives us singing, “Enter holy pilgrims.” Then the children collect their special Christmas treats like colaciones and alfajores and adults eat and dance, and finally the piñatas come out. Everybody, kids and adults, enjoy singing and catching fruit and candies once the piñata is broken. There is always extra fruit and candies for those who weren’t lucky enough to catch any fruit.

I’m very happy to share a version of these celebrations from home and I hope others will look forward to them with joy as I do every Advent season.