In these fractious times when many are leading lives of not-so-quiet desperation, we need to heed those who remind us that All Life is One Sacred Wholeness: We are All Connected.

The Oblates of Holy Wisdom Monastery are delighted to welcome Sisters Helen Prejean and Marya Grathwohl, who will be conducting this retreat. They will explore the twin themes of care for the earth and people, especially our most vulnerable brothers and sisters. This event is also open to the public. 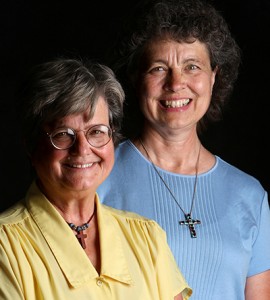 Sister Helen Prejean, CSJ, will highlight her work with prisoners on death row, with victims’ families and advocacy work to end the death penalty in America.

Sister Helen is a member of the Congregation of St. Joseph and spent her first years with the sisters teaching religion to high school students. In the early 1980s, she lived in the St. Thomas Housing Project of New Orleans working at Hope House. During this time, she was asked to correspond with a death row inmate, Patrick Sonnier, at Angola and became his spiritual adviser. After witnessing his execution, she chronicled her experience in the bestseller, Dead Man Walking: An Eyewitness Account of the Death Penalty in the United States (1993). Her book was the inspiration for a major motion picture released in 1996, directed by Tim Robbins, who also did the screenplay adaptation. It starred Susan Sarandon as Sister Helen (who won a best actress Oscar) and Sean Penn as Sonnier. Her book also was the basis for an opera presented by the San Francisco Opera in 2000.

Sister Helen continues to campaign against the death penalty, counsel individual death row prisoners and work with murder victims’ family members.  She has accompanied others to their deaths and has written about two of them in her second book, The Death of Innocents: An Eyewitness Account of Wrongful Executions (2004).

She has received honorary degrees from universities around the world and has been nominated for the Nobel Peace Prize three times. She is working on her third book, River of Fire: My Spiritual Journey.

For more information on Sister Helen’s Ministry Against the Death Penalty, visit www.sisterhelen.org.

Sister Marya Grathwohl, OSF, will reflect with us on the profound connections of faith, spiritual practice and commitment to God’s creation. She has been an Oldenburg Franciscan Sister since 1963 and has lived for many years in African-American, Crow and northern Cheyenne communities. During this time, she initiated the revitalization of her community’s farm in Indiana, integrating natural farming methods with vegetable gardens, chickens and heritage breed cattle.

As founding director of Earth Hope, Sister Marya has served as a consultant for a women’s center in Montana’s northern Cheyenne country, developing wind and solar energy, ground-source heating and cooling, a greenhouse and native prairie restoration. Earth Hope provides a popular Cosmology class for use in jails and prisons in California, New York and Missouri where participants study the story of the universe. Through narrative, science, art and guided imagery, inmates discover their profound connection with all creation and other people.

Sister Marya offers retreats, workshops and lectures that enliven people’s heartfelt connection with the whole Earth community and nourishes their commitment to care for our common home. For more information, you can email her at earthhope@vcn.com.

Retreat participants will have ample time for prayer, private reflection, scripture, and to be with nature, as well as time to share and pray with each other. It is our hope that participants will return to their families and communities refreshed and re-energized in their commitments to care for creation and people in need.