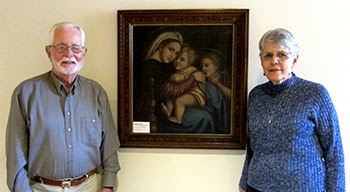 My husband Rich Hemlin and I are members of Sunday Assembly and the oblate community. We feel so blessed to have finally found our spiritual home at Holy Wisdom Monastery.While visiting my family in Vermont over the years, we would go to worship and spend time at the Weston Priory, which has a wonderful music ministry. Rich asked the abbot, Fr. Leo Rudloff, OSB, who was an old German monk, if he knew Fr. Philip Fischer, OSB. He said he knew him and he was an exemplary monk. Since then, Fr. Leo has passed away and is buried beneath his favorite chapel window. Fr. Philip (1865-1933) was Rich’s great uncle who spent much of his ministry planting Benedictine monasteries in the Pacific Northwest. Rich has told me many times about spending Sundayafternoons after Mass with his widowed grandmother, Katarina Fischer Hemlin, who would play the piano (she loved Mendelsohn) and served German potato salad and sausage. He remembered a painting of the Madonna and child, painted by Fr. Philip around 1920, hanging in the living room by the piano. His grandmother died while Rich was serving in Korea and the painting disappeared from his life until it resurfaced last year.

Rich’s brother contacted us to see if we would be interested in donating this painting to Holy Wisdom as a permanent home. We discovered the painting is a rendition of the Madonna della Sedia by Raphael (1518). The original is in the Galleria Palatina in Florence. After talking to Sister Mary David Walgenbach, who accepted the painting, and Sister Joanne Kollasch, who found an appropriate spot to hang this painting, it now hangs in the meditation chapel of the oratory. We are not sure where it was all these years, but it now resides permanently in our Benedictine monastery, having come full circle.

All are welcome to join us for worship each Sunday at 9:00 am. For more information contact Lynn Lemberger at llemberger@benedictinewomen.org, 608-836-1631, x138.