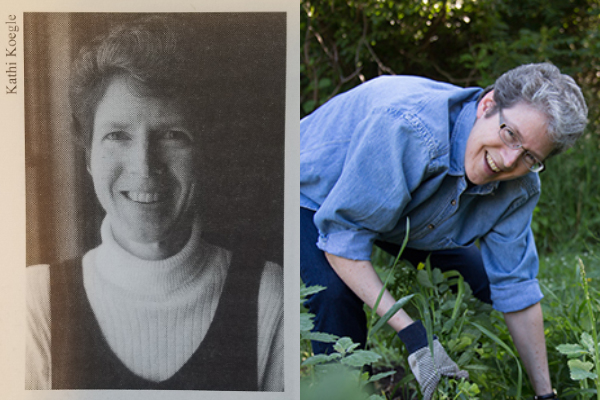 It’s difficult to think of Holy Wisdom Monastery without including the sisters. However, back in 2000, Sister Lynne Smith was just stepping into the life with the Sisters of St. Benedict of Madison. 20 years later, only two days after the anniversary when she committed herself officially to this life, we can return to her thoughts from the beginning.

The following post is a direct transcription of the article, New Monastic for a New Millennium by Sister Lynne Smith, as written in our newsletter, Benedictine Bridge, Ordinary Times 2000 issue.

I am one example of a new monastic for the new millennium. I am a Presbyterian Benedictine–an ordained minister in the Presbyterian Church (USA) and a novice in the ecumenical community of Benedictine Women of Madison. Thanks to the pioneering vision of the Sisters of St. Benedict of Madison, I can live the monastic life as a Presbyterian woman. I am invited to embrace and be nurtured by the Rule of Benedict in a community of vowed, religious women, both Roman Catholic and Protestant.

For me, this opportunity is a gift of God’s grace. For more than 13 years, the call to a contemplative life in community grew within me. In the Reformed tradition to which the Presbyterian Church (USA) belongs, we do not have religious orders. During the Reformation in the 16th century, both Martin Luther and John Calvin rejected monasticism. Though a few houses on the continent initially became Protestant, monasticism remained suppressed in Protestant areas of Europe. Essentially, our tradition lost the monastic expression of the Christian life. Protestants who felt a call to the contemplative life had to find other ways to live it out. It was simply assumed that monasticism was outside the Protestant expression of the Christian life.

Spirit and faith open new doors to search for community

While human beings place limits on how the Christian life can be lived, the Spirits blows where it will through the community of faith and opens doors for new expressions of life in the body of Christ. I felt the Spirit doing just that in my life, and I’ve seen it among members of my denomination. The Sisters of Saint Benedict have sensed the Spirit blowing through monastic life and opening doors to a new monasticism for a new millennium. There is a spiritual hunger stalking people in this country.

When I served a church in Wichita, Kansas, I joined a small group of lay-women who gathered twice a week for centering prayer and guided meditation. Like me, all had made retreats at Catholic retreat centers and sought spiritual direction for several years. As we listened to each other, we identified a common spiritual hunger. We decided to meet regularly to share our spiritual journeys, practice guided meditation, pray together and open our lived further to the Spirit. Not all the women were free to become celibate monastics, nor were all of them called to that expression of the Christian life, but they sought something beyond what our tradition offered at the time. Monasteries can provide guidance and support for those who seek to enrich their spiritual lives in this way. They possess the spiritual experience and history to offer women and men a variety of ways to follow God’s call in their lives.

The wisdom of Christian traditions offers a model for new expressions

In the early 1990’s, my denomination’s newly -created national Office of Spirituality invited a number of us with a special interest in this area to come together for a weeklong retreat. We were introduced to a small group model of spiritual discipline created a year before and invited to used it to build community among ourselves. We met at the Catherine Spalding Center operated by the Sisters of Charity of Nazareth in Kentucky.

A few days into the week, I commented on an irony. Here we were, struggling to develop a spiritual discipline for our denomination while surrounded by women who had spent their lives in a vowed, committed community. We hadn’t even bothered to talk to them about their experience! We didn’t consider that we might draw from models for living the Christian life that already existed in other Christian traditions.

There is a hunger among some Protestants for elements of the spiritual life that our traditions rejected at the Reformation. We do not wish to become Roman Catholic. We want to enrich the best of the monastic tradition, as we seek to be faithful to the path along which God is calling us.

The Sisters of Saint Benedict have seen an increase in the number of non-Catholics who use the retreat and conference center and come to the monastery for individual retreats. Some people who have either left their spiritual tradition or grown up without one feel a dis-ease, a lack of unnamed longing in their lives. They may not even recognize that their dis-ease may have a spiritual dimension. Monasteries are places where seekers find hospitality, silence and guidance as they name the source of their dis-ease and begin the journey to God who is the source of our fulfillment.

Not all Christians are called to the vowed, contemplative life; however, there are many ways we can witness to the unity for which Christ prayed. The Rule of Benedict offers great wisdom on how to live a balanced, Christian life. Monastics provide the larger church a great service as they demonstrate ways the Rule can be lived out beyond the monastery walls. Writers Joan Chittister, OSB, and Esther deWaal make the Rule accessible to all as they adapt it to everyday life. Kathleen Norris found a way to bridge the Reformed and Roman Catholic traditions in her book, The Cloister Walk. She writes about her personal experience of the Rule of Benedict and monasticism and tells how they shape her spirituality.

As a new monastic, what do I seek from monastic life?

I seek a community that holds Christ and Scripture at its center and shared the values important to me: truth, integrity, gratitude, joy, wisdom, humility and education. That is what I found when I read the Rule of Benedict. I seek a place where I can grow toward union with God in the company of others, where I will be supported, challenged and held accountable for my life and growth toward God and others.

What do I hope to contribute to monastic life?

I seek to offer my gifts for the up-building of the body of Christ. I hope to share the richness of my Reformed tradition with its emphasis on the study of Scripture, scholarship, the sovereignty of God, corporate worship and stewardship of all life. I want to become a bridge between the American Benedictine community and the Presbyterian Church in the USA.

Not all monastics in the new millennium will be Roman Catholic. At the turn of this new century, Protestant as well as Roman Catholic women have the opportunity to live in a religious community guided by the Rule of Benedict. Monastics have much to offer the church boundaries and listen to those outside our own tradition. Then, the church will move one step closer to the unity for which Christ prayed.