Respectful listening is the first and foremost quality for leadership according to St. Benedict. He begins his Rule with “Listen.” For anyone seeking to grow in relationship to God, self and others, attentive listening is key for a whole and holy life. 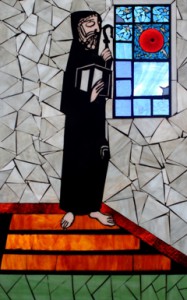 Two premises support the understanding of leadership in the Rule of Benedict (RB). The first is that Christ is the ultimate authority and second that the abbot represents Christ in a special way for the community. The leader, either prioress or abbot, is chosen by the community and receives what Benedictines believe to be the grace of office. The leader and community are subject to the Rule. Benedict balances the use of authority of the leader with the community’s responsibilities for speaking and listening on issues of importance (RB 3).

In chapters two, three and sixty-four of the Rule, Benedict looks at the question of leadership from both sides: how the monks are to live under the authority of the prioress or abbot, and how leaders will exercise authority. Discretion, the art of being able to distinguish and choose what is appropriate, describes how the prioress relates to the members of the community. For each person, in any particular situation, there is a level at which the monk will work best.

The prioress uses care that no one is overworked, such as the table waiters or cooks; allowances are made for seasonal work; extra wine should be given if the heat is excessive (RB 40). The authority of the prioress is in no way rigid. She must adapt to the personality of each sister
(RB 2).

All members of the community are called to participate in weighty decisions affecting the community because God often reveals what is better to the younger members (RB 3). After listening to all the members, Benedict gives the final decision to the prioress. It is unusual for a prioress to decide against the community’s choice.

In my years as prioress, beginning in 1977, adaptation and change were frequently used words as we sisters grappled with the implementation of the documents of Vatican Council II, especially the Decree on the Renewal of Religious Life. Society’s emphasis during the 1960s and 1970s also influenced women religious and counterbalanced an excessive uniformity. These were exciting and painful times for us but growth implies change.

As I review my years in leadership and look toward the future, I am grateful for the wisdom and realism of St. Benedict. His emphasis on consultation, listening and speaking with humility enabled my community to make enormous changes.