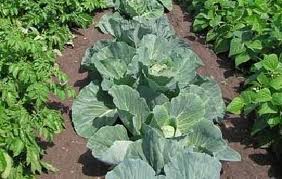 I eat food. I eat at least three meals a day, sometimes I snack. And I enjoy food. Well, more accurately, I enjoy restaurants and cooking. I love to read about food, the traditions, the history, how to cook it. I know things about food. Like, that it comes out of the ground. Sometimes from trees and animals. Sometimes it’s expensive, sometimes not. And I know there are a lot of people who don’t have it. I have always had food. Good food, a lot of times great food. . . .  So, I was surprised at my reaction to my first glimpse of the monastery garden. It went something like this,

I was speaking of a green bean plant. The green bean plant probably didn’t think it was doing anything particularly remarkable by producing its crop of green beans. But I had never seen a green bean growing on a bush before. I was thrilled. I felt like a little kid surveying the shelves of an old-fashioned candy counter as I looked up and down the rows of the garden. There were carrots just like in a Bugs Bunny cartoon, their frothy green tops rising out of the black earth. There were white flowered pea vines with ACTUAL PEAS GROWING ON THEM. Just hanging there. I took one out of its shell and popped it in my mouth. The taste was pea-ey and wonderful.

I had never really worked in a garden before or even wanted to, really. All that dirt, the bugs, being out in the wet or the hot sun, sweating…ugh. Plus, I had a “brown thumb”.  . . . I just patronized farmer’s markets and felt like I was doing my part by not eating tomatoes in the winter. So, I guess what I’m saying is that aside from a herb garden on my porch, maintaining an actual garden, like one in my yard that grew actual vegetables…that was never on my to-do list. Now, my sense of wonder made me want to know more.

Sister Lynne had us weeding and picking beans and peas. She told us all about her work with them that year and spoke about their differences and their needs with a maternal tenderness. She showed us how to hold the plant as we picked off the product so as to not damage the larger plant. We didn’t pick the small beans so as to “give them a chance to grow.” She told us to weed around the squash and lettuce to give them “more space and room to breathe”.  So, even though I had to ask  her every 3 minutes if something was or wasn’t a weed, I still felt as if the lettuces were thanking me with a huge sigh of emphysemic relief as I finished up.  . . .  As we worked we spoke of Michael Pollan and the slow food movement, of the hectic modern life we lived in the city as opposed to our lives here. We talked about how we felt rushed, so rushed every minute of every day.  . . .

As we finished up I felt grateful. I was hot, burned, dirty, sweaty, and had dirt in my shoes and two mosquito bites on my arm. But I felt happy. And I felt useful. Like I had done something, really DONE something. Something essential and important and GOOD. Something that somehow connected me to something greater than myself, to the land, to other people, to time and space and the infinite. I was helping to make food. Food that people would eat. That I would eat. And it would taste good. The work of planting, of weeding, of watching, and caring seemed worth it to me now in a way I had never imagined it could be. After all, what was all my work next to the magic of the plant that made my food?

For more reflections go to the complete set of excerpts at: A Confirmed City Girl looks for God in a Monastery.