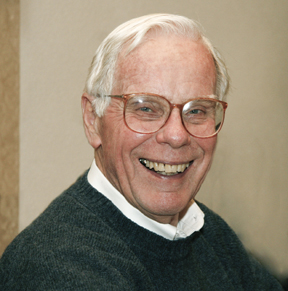 Like Thomas Merton, Ed believed that every event in our lives holds something of the divine. Some experiences from Ed’s life at St. Benedict Center portray this belief.

In the mid-60s monks of Taize along with our sisters led weekend retreats for university students at our Academy of St. Benedict. Ed, a good friend of the monks of Taize and an active member of Madison Campus Ministry arranged their fall retreat at our newly opened ecumenical retreat and conference center known as Saint Benedict Center.

We had a stable of six or seven riding horses from our Academy Riding Club that were used for weekend lessons. Ed made arrangements for the campus ministers to have a brief lesson and a trail ride.

My sister, Roleen, (Danielle), and I were the leading this adventure. After a few times around the ring, showing them how to hold the reins, I sensed an eagerness to hit the trail and their self confidence that they were ready for the adventure.

Emphasizing the importance of staying between the lead and end riders, we trotted, or more accurately, “bounced” through the edge of the woods into the open meadow. Hearing shouts of Whoa and Hi-ho, I  Iooked back and saw galloping horses in every direction. Ministers hanging on to the mane, saddle or whatever part of the horse they could grab. One horse was racing back to the barn.

In fear for the safety of the ministers and the catastrophe that could happen,I thought surely this was the end of the ecumenical movement at St. Benedict Center. In contrast, Ed saw it as a beginning!  Perhaps even a religious experience! Two nuns on horses  with veils flying leading a pack of ministers into the open space! Ed reported that this was the beginning of his ecumenical conversion.

Another less dramatic experience is of Ed and Shirley. For many years they had a large vegetable garden here.  Shirley was the Master Gardener. Ed watered and weeded. After a couple of hours work they often brought a picnic lunch and rested in the beauty of creation.

Among the sisters, Ed was fondly known as our Protestant monk. He often sat in silence in our meditation chapel.  He believed that meditation awakened him to the wonder of God and the awareness that humanity and the universe are one in God.