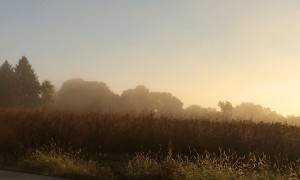 James [not his real name] and I stood outside talking in low voices. The autumn air was cool, but our discussion was getting heated. We had just come out of a packed lecture hall where 3 speakers offered their thoughts on Calling in Today’s World: Multi-faith Perspectives.

The diverse panel included Amy Eilberg, the first woman ordained a rabbi in Judaism’s Conservative Movement, and a teacher of inter-religious and intra-Jewish dialogue; Anantanand Rambachan, professor of religion, philosophy and Asian studies at St. Olaf College and a specialist in Hindu tradition and interreligious dialogue; and, Mark Unno, associate professor and religious studies advisor at the University of Oregon, a practitioner and teacher of Buddhism. Although there were parallels in the Jewish, Hindu and Buddhist traditions, I was surprised to learn from these interreligious scholars just how unique a sense of personal calling and guidance were to the Christian tradition.

James, a fellow theology graduate student, and I had only recently shared our own calling stories with each other. As we walked out of the lecture hall, I asked for his thoughts. He looked frustrated. “I wish folks would talk honestly about what happens when a calling ends. What happens when a decision that you discerned deeply about, wrestled with, fought over, prayed through—changes or ends completely? Do we just chalk that up to a mistake, a failure to hear one’s true calling? How does anyone keep listening?”

The question came from his own life, but it could just as easily have come from mine too. James had been a monastic seminarian but after extensive soul-searching, he had left his community and was now on a more independent path toward a PhD. His calling had shifted.

I had to admit, so had mine over the years. I was once a vocationally fulfilled lawyer, a public defender in New York. I had been doing “God’s work” with the poor and marginalized for years. And yet, after a year-long sabbatical, I discerned the end of the legal work which had formed me and which I’d come to love. When I came to Holy Wisdom Monastery, I sensed a different calling, a different possibility for my life and new way of living out a profession.

Was the whole law-thing a mistake then?  Had I heard wrong? Would this monastic calling last, or would it too yield in time and change?

It occurred to me that James was right. We don’t often talk honestly about the complexity of calling. The picture of vocation (particularly in Christian circles) can look uni-directional. But it’s rarely a direct trajectory for most people. Perhaps it would help if we talked more openly about the evolution of a vocation. There are often twists and turns, but each bend in the track also contributes to who we become, how we love, the risks we’re willing to take.

One has only to think of one’s own romantic history to know that despite a sense of deep calling and mutual love, sometimes a very significant relationship ends. We discern a different path; we’re forced to move on. One’s sense of calling in the world can and does shift in response to the circumstances of our lives and the opportunities available to us.

Perhaps it would help if we acknowledged the pain and disorientation that often accompanies the pursuit of a calling. It isn’t always choirs of angels and rose petals, sometimes it includes accepting the past (with all its trial and supposed error) in order to open up to the quiet possibility of something new and fulfilling.