I’ve tricked most of my house into following the popular NBC television show The Voice, which features four superstar music coaches who select teams of vocalists in blind auditions. The rivalries and ribbing between the coaches make it particularly entertaining, but the really fun part of the show is when multiple coaches want the same person on their team (photo, above, by Trae Patton/NBC). Then the power to choose a mentor shifts to the singer, who listens to each coach make their case— and finally, she gets to choose.

One of those moments occurred on the opening night of the show last week when a 17-year old took the stage and caused all 4 coaches to turn their chairs. In what must have been a surreal moment for the teenager, each of these super-famous music coaches made their pitch, seeking to highlight what he or she could uniquely bring into the mentoring relationship—falling over themselves to have the privilege of helping her. After hearing it all, she was left to make her own decision of who she would choose as coach.

As I watched her struggle with the decision, it struck me that what I was witnessing was a discernment process—in front of a live audience. For that young singer the choice was potentially critical. Which coach would best develop her artistic potential? Who would provide the best fit for her talents and goals? Whose leadership, experience and advice could she trust?

Curiously, the scene stayed with me throughout the week, intersecting with what I’ve been reading of the tradition of spiritual mentoring and discernment among the desert mothers and fathers. These wise elders became known as some of the very best teachers of spirituality, but they also had a reputation for being notoriously inaccessible to seekers. They had a tradition of testing a would-be-disciple’s desire, of making them audition, if you will. But then, if the seeker persevered and continued to show promise, the door was finally opened and a period of mutual discernment would begin. It was understood that if the mentoring relationship was going to work, it couldn’t remain one-sided forever: they needed to choose one another.

Like the desert elders, Benedict includes principles of mutual discernment and mentorship in his Rule:

“Do not grant newcomers to the monastic life an easy entry…
The concern must be whether the novice truly seeks God …
[t]he novice should be clearly told all the hardships
and difficulties….” 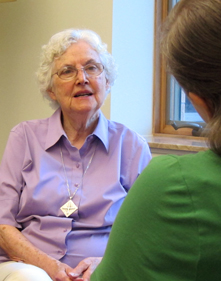 Even after opening the door, Benedict insisted that an elder meet with the newcomer at regular intervals, at two months, six months and ten months. Each time, they were to engage in dialogue, discerning together whether the relationship was working. Back and forth, the elder and seeker engaged in conversation, building vulnerability, trust and openness.

When I first read this section of the Rule, I couldn’t understand why Benedict had instituted this careful process. Now, approaching six months into my time as a Benedictine Sojourner, I can better appreciate its wisdom. Discernment within a mentoring relationship requires that both elder and seeker are able to relate to each other as adults. (Otherwise, you run the risk of abuse.) Only when both are genuinely able to see the other’s gifts are they able to leave each other free enough to choose the best and wisest path to God. While the process may begin with a young seeker looking for a mentoring elder, eventually the relationship matures so that both are able to choose one another because they have truly and freely discerned God’s will in it.