by Nancy Breitsprecher, Oblate class of 2002 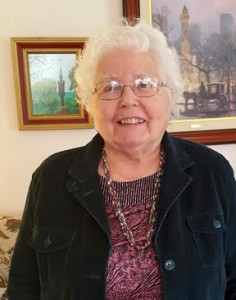 Despite the pressure to live in the “now,” my gratitude is to Holy Wisdom Monastery and the oblate program that have led me along through my later years. Back in the 1980s I visited Saint Benedict Center—attending a few retreats, browsing the library as a new preacher.Becoming an oblate is to take a particular path through the “changes and chances of this mortal life,” as noted in many older books of common prayer.

In 2001 my husband Paul and I came to a retreat and learned about Holy Wisdom Oblates. I was 70 at the time and Paul, 76—feeling already elderly and retired, we were not sure about joining the program. Sister Joanne was very encouraging, and so in 2002 Paul and I made our first commitment to the program.

We found the oblates to be lovely people and it was encouraging to experience a new sense of community. The years rolled on with their changes and chances. Paul developed long term problems and had to drop out. I was able to attend fewer and fewer retreats.

What difference has being an oblate meant to those of us who are no longer in closer touch? There are now many oblates whom I do not know personally, but I have found there is a bond that similar actions and dedication create.

Now that I am in my 85th year; Paul has died and I have found I have slowed down. I wake slower in the mornings but a set of morning prayers give my day a positive sense, now that there is no one waiting for breakfast! The day still starts in a familiar way with morning prayers which bring me into alignment with gratitude for God’s grace and presence.

The books that line the shelves in several rooms remind me of earlier retreats: Meg Funk, James Finley, Macrina Wiederkehr, Joan Chittister, a shelf of Merton—all remind me of special times of inspiration.

At night, as at morning there are prayer books which connect me to a wide Benedictine world: Work of God, edited by Judith Sutera OSB, St. Benedict’s Prayerbook from Ampleforth Abbey, York, England, The People’s Companion to the Breviary by The Carmelites of Indianapolis, Merton’s A Book of Hours, and for travel a paperback, Celtic Daily Prayer, from Morehouse Publishing. I alternate use of these books, sometimes by seasons, to keep the words fresh.

The Holy Wisdom Monastery connection was appreciated when Paul died in 2015 and the sisters came to the visitation and an oblate spoke at the service-a sense of a spiritual tie despite distance.

There are many oblates whom I have never met. I rarely see the ones I did know, although thankfully there is a local oblate here in Fort Atkinson. Yet the sense persists that there is a connection beyond time and space that has the mystery of God at the heart. There is a light that covers sorrow, a joy that springs—and re-springs—within us. We are not on the path alone.