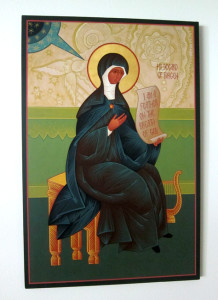 What is the bond that links monastic tradition and the creative arts? The concept of withdrawal from society is central to the tradition of monasticism, a term derived from the Greek monos which means a solitary person. Yet paradoxically monasteries have been fertile hotspots for literature, music and visual art, often functioning as a hub for the nurture and preservation of creative arts down through the ages.

Hildegard of Bingen (left), was a 12th century Benedictine abbess, mystic, artist and composer. This icon, created for the sisters by Peter Pearson, graces the wall at Bingen House, Holy Wisdom Monastery.

Christian monasticism began in Egypt in the 3rd century when some women and men chose to withdraw from society and live in the desert outskirts to pursue a life with God. Communities emulating the strict disciplines of these holy women and men quickly spread across Europe and became an important part of medieval society.

While the monk’s original intention may have been to withdraw from society, monasteries soon became centers of community, hospitality and learning—drawing influential and wealthy visitors who were attracted by the monastic way of life and wished to secure divine favor with their donations. As the number and wealth of monasteries increased, so did the need for houses of worship, books and devotional objects for the daily life of the religious community. Religious houses became enthusiastic patrons of the arts, and the monastic commitment to manual work balanced with prayer, allowed many monks and nuns themselves to serve God as creative artists.

Although an unlikely source at first glance, monasteries were powerhouses for innovation in the arts. From the 6th through the 12th centuries, most of the books of the Western world were produced by monasteries. Skilled scribes copied and illuminated texts with intricate original artwork. These mixed media works were not simply decorative, but were intended to draw the viewer into a sustained contemplation of the layered meanings within the writing.

To enhance the liturgy and periods of prayers that characterized the common religious life, monastic musicians created striking choral arrangements and plainchant (also called Gregorian chant) for scripture readings. In order to keep everyone on the same note, medieval monks invented the system of musical notation based on spoken syllables (do re mi) that is still in use today.

To create an environment for devotion, monastic communities fostered relationships with visual artists who could beautify their spaces. Some of these artists were monks and nuns, but others were not, and ongoing conversations between patrons, artists, and monasteries produced lively partnerships between the larger society and cloistered communities. Famous works of art—Leonardo’s Last Supper, for instance—were originally commissioned for monastic settings.

To this day, all monasteries pay great attention to an aesthetic sense that honors beauty, balance and harmony as attributes of God. For untold years, music and art have been a means of focusing the mind and body, facilitating meditation and prayer across time, language and culture. One can look to the use of shared songs, chants, singing bowls or iconography as diverse forms of music and art that draw people into a state of alert devotional stillness in many sacred traditions.

Perhaps most importantly, however, the creative arts and prayer together can unite us with other living beings and with the planet at large. Art is a means of perceiving and appreciating the sacred and of bringing people into the presence of wonder. The monastic tradition, through its ongoing commitment to spiritual growth and the common good, continues to provide vibrant spaces for the flourishing and advancement of creative arts.

This blog post was originally printed as an article in the June 2014 issue of Nature’s Pathways. It has been modified for this blog post.