On March 13, 2021, during one of our monthly bird surveys, Friends of Wisdom Prairie volunteers spotted a Great Horned Owl (GHO). A few minutes after the initial sighting, we spotted a nest close by with another GHO sitting on it. We knew we had seen a mated pair. We weren’t surprised because we had seen owls on the grounds before. Since December, they could be heard calling.

A few days later, one of the birders in our group, Triet Tran, sent out a picture of two nestlings in the nest. Triet visited daily to take pictures of the owls. About a week later he saw that there were three nestlings. The third nestling was a bit smaller than the other two. Because GHOs lay their eggs a few days apart, the owlets may be different ages. All were fully feathered with light tan fluffy feathers. 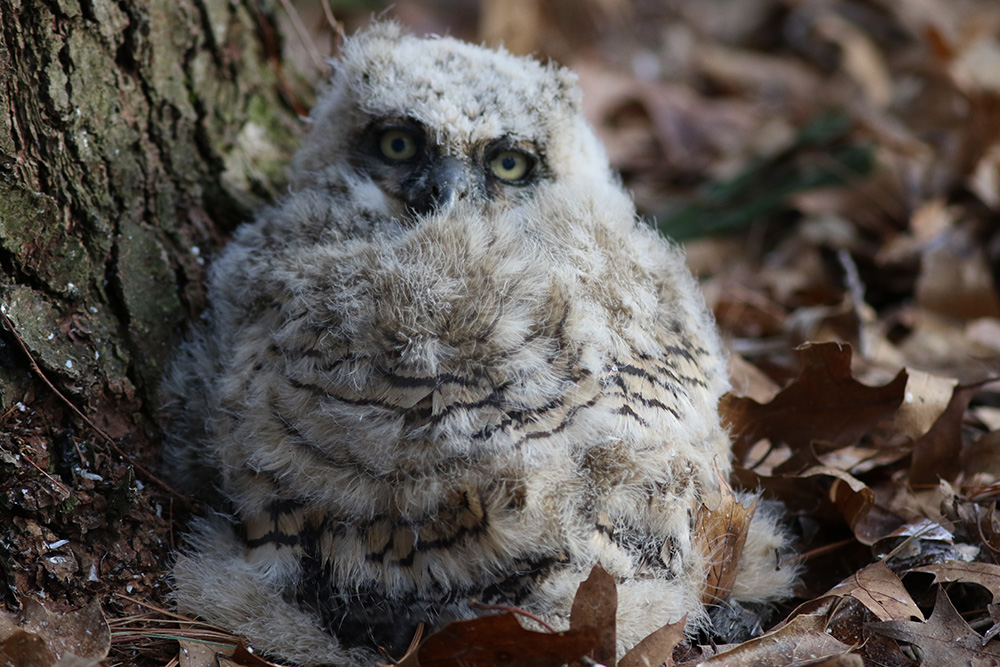 On Palm Sunday, Triet only saw the two larger owls. They already had small ear tufts. He waited for an hour to see the small one. Then he found it on the ground below the nest. The strong winds may have been a factor. Young owls do venture out to the edges of the nest and sometimes they fall to the ground. The owl was too young to survive on its own. The parents would likely feed it, but it couldn’t escape predators. He brought it to the Monastery just as we were gathering for Sunday Assembly. Sister Lynne Smith and Sarah Wilkin Gibert found a box to put the owl in and some towels to keep it warm.

Staff on call at the Dane County Humane Society Wildlife Center advised us to bring the little owl in for a check-up to see if it was injured. They asked if we would be responsible for monitoring the owl family if they helped us reunite them. Many volunteers said they would do whatever was necessary. So, I took the owl in for an examination. We waited to hear what they found.

Little owl was uninjured. Wildlife Center staff made a plan to reunite it with its two nestmates and parents. They decided to strengthen the nest so that it would last for the rest of the season. A sturdy nest may be used for a couple of seasons by the same pair of owls. Reuniting requires a special team consisting of a licensed Wildlife Specialist, a volunteer who is a licensed arborist and another volunteer experienced with owl rescue. I waited for each of the team members to arrive late Monday afternoon.

Colin, the arborist, came first. He was equipped with all the ropes and hardware he uses in his job working for Bugg Treecare Company. First he attached his ropes to points above the nest to be able to make a safe ascent. On his next trip up, he carefully put each of the older owlets in a five-gallon bucket and brought them down to the ground. This was so that they wouldn’t be in the way as he secured a new nest over the original one. Volunteer Carol Pope finished getting the new nest ready. It was a wooden bushel basket filled with fresh pine boughs. Carol threaded twine through the slats in the basket so that Colin could tie it to the tree branches. Colin took the new nest up and placed it over the old one.

This whole process was directed by Sarah Karls, the licensed wildlife specialist who was overseeing the project. Sarah and Carol carefully placed the rescued owlet into the five-gallon bucket where its siblings were waiting. A small bag of dead mice was tied to the cover. This would be their first meal in the new nest as they waited for their parents to return. The young owls snapped their beaks as a sign of their distress at the strange happenings.

On his last ascent, Colin carried the precious cargo up to the new nest and placed the owlets inside. Sister Lynne was out walking. She watched the whole process. We both breathed a sigh of relief as Colin returned to the ground. The young owls were confused and concerned, but they were safe.

We couldn’t see the owl parents, but we knew they were watching and waiting for all of us to leave. They likely returned to feed their young after we left. The next day, the three owlets calmly looked out from their new nest. On Wednesday, the mother was at the nest with the young, apparently not minding people walking close by.

The decision to intervene with wildlife is not always clear. In this case it seemed like the right thing to do. Great Horned Owls are part of an interconnected web of many life forms at Holy Wisdom. We wish them success this year and for many years to come.