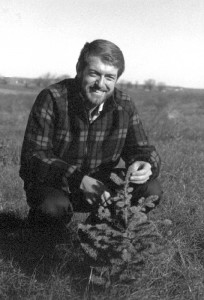 Neal Smith checks one of the new trees planted in our Conservation Reserve Program (circa 1987).

Neal’s history with the sisters started in 1973 while he was still in school at the University of Wisconsin-Madison finishing a Bachelor of Business Administration Accounting degree. Neal was introduced to Sister Mary David Walgenbach who took Neal horseback riding. The sisters became one of Neal’s clients while he worked part time at the CPA firm. He helped set up their payroll and accounting systems and performed their annual audits.

After graduation, Neal worked full time for the CPA firm Carncross, Schroeder, Stein, Williams, Young & Co.for several years before leaving to work for Hallmark Homes, then the Munz Corporation as executive vice president. During his time with Munz, they built over 2000 apartments, a shopping center, condominiums, offices, and remodeled the Lake Terrace Office Building. He continued his relationship with the sisters by volunteering on various committees.

In 1971, Neal married Diane Avery who also had a history with Holy Wisdom Monastery. Diane attended high school at The Academy of St. Benedict, from 1963 until 1966 when the sisters closed the school. Sister Joanne Kollasch thought Diane would make a great sister. Luckily for Neal she followed her heart’s desire.

Neal and Diane’s daughter Kristin was born in 1980 and the family began worshipping here with Sunday Assembly that same year. By the beginning of 1986 Neal decided to get off the corporate ladder in order to spend more time with his family. Sister Mary David had once told him if he ever needed a job to give her a call, so Neal met with Mary David who hired him.

From the outside, Holy Wisdom Monastery seemed very different from the Munz Corporation, but Neal explains that there were actually several similarities. “Both were operated by sole proprietors, family owned businesses who valued their employees and offered comparable benefits.” The pay was very different, but so were the hours. Neal liked that he didn’t have to wear a tie, however former colleagues kept asking “when are you coming back to the real world,” to which Neal always replied “this is the real world too.”

The Madison Benedictines embrace change and Neal has seen many changes at Holy Wisdom Monastery over the 25 years. Neal views helping make these changes as some of his most satisfying accomplishments, including going from a canonical community to a non-canonical community; the remodeling of nearly all the buildings at Holy Wisdom Monastery and the completion of the LEED-certified monastery building.

Sister Mary David’s innovative, creative leadership style complements Neal’s need to look carefully at each situation and assess which solution will work. According to Neal, “we can argue and scare the heck out of other people, but we are fine because we respect, understand and trust each other.”

Neal’s favorite part about his job at Holy Wisdom Monastery is the variety—from the financial planning to the fundraising, from the governance to overseeing the people, land and buildings, from the work with the Federation of St. Gertrude to the work with the National Association for Treasurers of Religious Institutes.

Neal’s retirement plans include taking care of his mother and Diane’s mother, traveling, consulting for Holy Wisdom Monastery and others and possibly teaching. He is happy that he will still be connected to this place, but he won’t miss the day-to-day responsibilities.

“It has been an amazing ride, from the first day on a horse with Mary David, all the way along,” Neal summarizes.

Thank you Neal for your commitment to the sisters and Holy Wisdom Monastery. Your presence here over 25 years has created stability as you worked hard to oversee all the change!