A lot has been happening at Holy Wisdom Monastery as we care for the earth this year!

The monastery has a master land management plan that calls for the restoration of all of the fire communities of southern Wisconsin. This includes Prairie—a grassland, Savanna—a grassland with a few widely spaced oak trees and Forest—an oak-hickory woods. These natural communities will grade one into the other in a continuum of tree density. None, a few and a lot. Preparing for these communities takes a lot of work.

Using the master land management plan as a guide, a list of activities is developed for the coming year each winter. Different activities are scheduled for the different seasons in order to perform the action when it is most appropriate. For example we have to pull garlic mustard plants before they disperse their seeds.

Last winter we cut down some unwanted trees and dragged them out on the ice on Lost Lake, resting the base of the log on the shore and having the rest of the tree stick out into the lake. After the ice melted, the branches settled down into the mud forming a habitat for amphibians to live and have babies in. You may have noted that the trunks of these trees now slope down into the water, providing a place for turtles to sun themselves. I have a marvelous picture of a mother and father duck sharing one of those logs with a bunch of turtles. Beautiful!

Early in the spring before things greened up, we had several prairie burns. I intend to schedule the burning of about 1/3 of our natural lands each year, which will fairly soon include savanna and forest in addition to the prairies. Historically all of these communities burned fairly often. One of the reasons for not burning every year is to provide a refuge for insects and other members of the community over time.

Each year, invasive weeds begin to grow in our natural lands and we need to remove them before they set seed, and wreak even more havoc in future years. So there is a rush of activity early in the growing season to control garlic mustard, reed canary grass, Dames rocket, Japanese hedge parsley, sweet clover and wild parsnip to name some of the most important of these problem plants.

Over the past two years, we have been cutting down weedy trees in a fence row almost due east of the monastery and in a ravine in the old field just north of the fence row on the new parcel of land bought in 2012. This was a huge project—removing several hundred mature trees and all of the weedy buckthorn, honeysuckle and grapevines that lived under the trees. That project is essentially finished but we will need to follow up with an herbicide treatment of the re-sprouts. 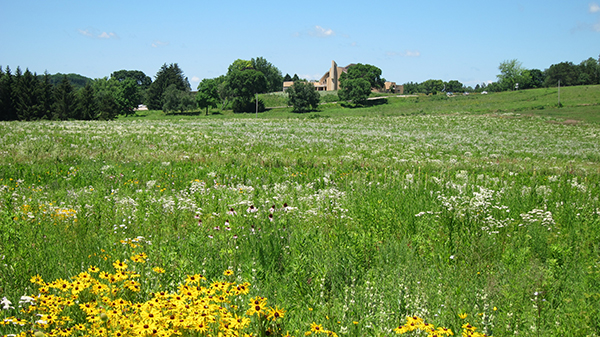 In the first couple of seasons after a prairie is planted, the most dominant vegetation are annual weeds. You can see a few of the little prairie plants just getting started under these towering weeds. Most frequently one has to mow the weeds down a couple times during the growing season to let a little light in for the prairie seedlings. On the 20 acres we planted on November 1, 2014, I mowed down the weeds twice last year. This year the prairie plants have been exceptionally successful with very few weeds, and we have decided not to mow at all, which is quite unusual. The area is covered with flowering prairie plants and is quite amazing to see. I’m thrilled! In May 2015 we planted another 9 acres of prairie southeast of the old barn. I mowed this twice last year, and will be mowing it in mid-season this year. Although there are a lot of prairie plants on that area, it has not come in as strong as the 2014 planting. I expect that many of the prairie plant seeds have yet to germinate, but will continue to do so over the next several years. These native plants have very complex dormancy requirements in order to germinate. In November 2015 we planted another 4 acres of prairie near the red barn and on the new stormwater detention basin. I have mowed this area this spring and will mow it again later in the season. It looks like a typical first year prairie seed sowing. 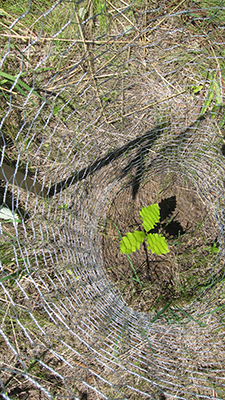 The first of the oak trees for the savanna were planted in June 2016. These were first year bur oak seedlings. The remnants of the acorn were still attached to the side of the little seedling. When it comes to planting oaks, and especially bur oaks, the rule of thumb is the smaller the better. Bur oaks send out a tap root that goes straight down, and they definitely do not like it if that tap root is disturbed. I have learned the hard way that planting more mature bur oaks is a treacherous thing to do and can inflict a lot of heart ache. I got these oak seedlings from friends of mine who operate a nursery in Reeseville, WI where they specialize in producing lining out stock. These are little seedlings that other nurseries buy and grow to larger plants before sale. The acorns for our bur oaks were collected in Waterloo WI. I have had to put wire cages over the little oaks to protect them from the deer.

Another large project that we have just begun is removing unwanted trees and shrubs from our woodlands and remnant savanna. This project is huge, and I hope to obtain a grant to hire a logger to advance the project more quickly than we can do with volunteers. Let me say however, that the volunteers have made good progress in the remnant savanna just west of the red barn. Here we will be releasing several old mature white oaks that undoubtedly stood on a savanna here before European settlement. They will be impressive to see after the weedy trees and shrubs around them are removed.

We have been working with Drew Hanson, a very talented trail consultant, to devise a new trail system for the monastery grounds, including the 53 acre Wisdom Prairie parcel the sisters acquired in 2012. I think you will enjoy walking these new trails after they are installed, in order to get to areas that were more or less inaccessible before. We have also developed a new trail system for the old North Prairie, which is now called the North Mendota Wildlife Area that Dane County owns. We have mowed in the new trails, and later this season we will be applying herbicide to the turf of some old trails that are to be eliminated. Then in November we will be planting prairie seeds on these redundant trails.

We have enough prairie seed on hand that we received from Dane County Parks and Ron Endres, a special and generous friend of the monastery, to plant 3 acres. One acre of seed will be for the eliminated trails on the North Mondota Wildlife Area, the second acre of seed is to plant prairie on the old fence row that had telephone poles in it until last winter, and the third acre of seed is to sow prairie over the old driveway that went to the farm house (which was burned down by the Middleton Fire Department last year) and barn.

So, we do have enough good work to keep us out of mischief this summer and well into fall as we care for the earth!