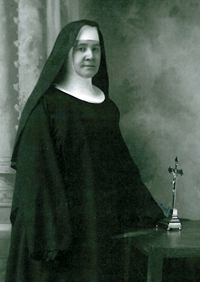 Born in 1864 in Pennsylvania, Mary Ellen McDermott became Sister Gertrude McDermott as a Benedictine sister in Conception, MO and later Maryville, MO. In 1881 Sister Gertrude traveled with three other sisters from Maryville to the Dakota Territory and Standing Rock Indian Reservation. They had been asked to begin a school for Native American children. Serving under challenging conditions in an unfamiliar culture and with no language in common, their first job was to gain the confidence of the children and parents, while praying for their own resolve. Slowly, working side by side and exchanging words in each of their own languages, the children and sisters learned to communicate with each other.

An elder in our sisters’ community told me this story about Sister Gertrude during her work in the Dakota Territory. I don’t remember which sister, but it is a story that was often told:

One day during a fierce blizzard there was a knock on the convent door.  Sister Gertrude opened the door and there stood Chief Sitting Bull, the famous Hunkpapa Lakota chief, known to be a fierce warrior.  He was seeking shelter from the storm. Mother Gertrude invited him to come in.  A friendship began between them. This first meeting occurred in 1883, after Sitting Bull had been released from the federal prison where he had been held in custody following the Battle of the Little Big Horn.

Some time later, Sister Gertrude learned that the U.S. Cavalry was pursuing Sitting Bull.  She feared for his life.  Asking one of the sisters to join her, she hitched up a team of horses to a buckboard and the two of them headed straight into Sitting Bull’s headquarters.  Oral reports credit the sisters with being the first white women to enter the Chief’s headquarters.

Sitting Bull warmly received the sisters and listened to their concern for his safety.  “You are my friend, Sister Gertrude, but I cannot grant your request to surrender.  I no longer trust the soldiers because there have been too many broken promises.”

Sitting Bull escaped capture at that time, but in a later encounter with the military, Sitting Bull was killed. It is said that Sister Gertrude was the last white person to see him alive.

In 1891 several of the sisters moved on to Elkton, SD. Here they established St. Gertrude’s Convent and boarding school, and here Sister Gertrude became prioress of the new community. In 1901, the convent was destroyed by fire, and the sisters, with five dollars and a few belongings, made their way to Sioux City, IA.  It was here, for over 50 years, that the Benedictine Sisters of Sioux City, IA established a home for working women, a hospital, a home for unwed mothers and their babies, later converted to a retirement home.

This community also established a hospital in Sterling, CO, and, in 1953 moved to Madison, WI. Mirroring Sister Gertrude’s courageous move to an uncertain future some fifty years before, the prioress and three companions traveled by train to Madison to search for a suitable location for a high school and mother house. Following Vatican II, the sisters shifted their ministry to the work of Benedictine renewal, monastic hospitality and ecumenical retreats and conferences. From that transition has grown the ecumenical Benedictine community of Benedictine Women of Madison and the ecumenical worshiping community of Sunday Assembly.

Forging into new territory has simply always been in the DNA of this community, and so it is no surprise to read these words from Mother Gertrude McDermott’s obituary:  “Mother Gertrude’s Christianity was all-inclusive.  She had a rare gift for friendship, recognizing no denominational boundaries.  Hers was a wholesome, sympathetic personality that inspired trust. Many were the troubled ones, young and old, who came to her with their problems and their grief.  Her one purpose appeared to be to relieve distress and to contribute to the general joy of living.  She looked on life as an opportunity to help others.”