By Jacob Stockinger, former music reviewer for The Capital Times

Excerpts reprinted with permission from his July 19, 2011 blog 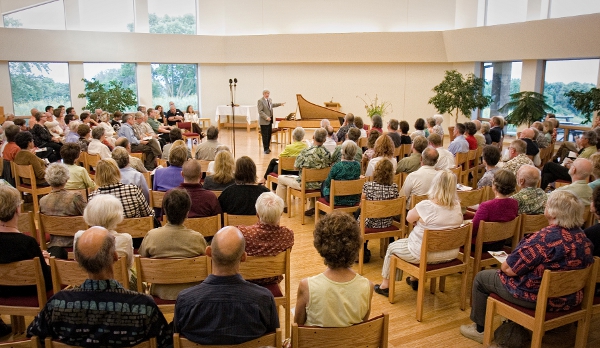 It would be hard to imagine a better way to meld classical music and land conservation than the Prairie Rhapsody benefit concert . . . at the Holy Wisdom Monastery . . .

Several things made the event, which included light dinner and desserts plus wine and other beverages, a success. One attraction was the lovely setting. The monastery itself is set in a prairie field that seems perfect for such an event. You can gaze at meadows, fields, woods and prairie from the outside and even from inside the large windows in the architecturally handsome and crisp new buildings and assembly hall . . .

From the hearty applause that came between movements, you could tell that two crowds were present: what I will call “The Music People” and “The Land People,” including of course many crossovers.

But what brought both of them together were two things: the pleasure of great music wonderfully explained and performed; and the cause of restoring the land—the Benedictine prioress informed the crowd that the program has already reclaimed to a pre-settlement state some 100 acres of prairie plus an 11-acre, 10,000-year-old glacial lake fittingly named Lost Lake and has also restored trails and ponds to improve run-off and protect nearby Lake Mendota.

The director of the music program was the well-known early music specialist Trevor Stephenson, who founded and directs the Madison Bach Musicians. He proved the other glue of the fundraising event . . .

First came Stephenson himself in a fortepiano solo (Mozart’ dark Fantasy in D Minor). Then came Emily Birsan in three of Haydn’s London songs in English followed by Mozart’s Violin Sonata in A Major, K. 305 with Brandi Berry. After a brief intermission came: two Schubert songs; Beethoven’s early Cello Sonata, Op. 5, No. 2, with Anna Steinhoff; and two Mozart works . . . And there was even encore to send the satisfied listeners home: a Schubert song about night and dreams . . .

This was a dream of a concert and a dream of a fundraiser— described by Holy Wisdom as a “great financial success” thanks to both tickets sales and donations. I simply can’t imagine a more enjoyable night replete with socializing amid nature and high art, all to raise money for a great cause. And it all went down so easily, so enjoyably.