In celebration of the feast of Mary Magdalene, July 22, the following reading comes from All Saints: Daily Reflections on Saints, Prophets, and Witnesses for Our Time, by Robert Ellsberg: 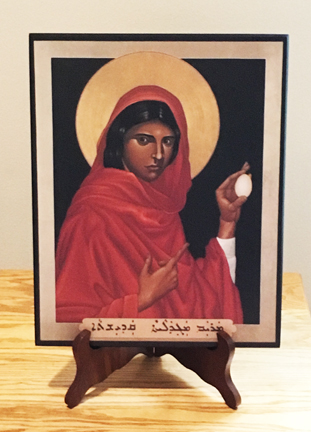 Mary Magdalene, icon by Robert Lentz, ofm, commissioned by Grace Cathedral on the occasion of the election of the first female Bishop in the Anglican Communion, Barbara Harris.

“Mary Magdalene was one of the original Galilean disciples of Jesus and the most eminent among the many women who followed in his itinerant ministry.  Little can be said about her origins; she is characterized simply as “a woman from whom seven demons had gone out,” a statement subject to various interpretations.  It was St. Gregory the Great who identified Mary with the woman, “a sinner,” who sought Jesus in the home of a Pharisee to wash his feet with her tears and dry them with her hair.  This gesture, which scandalized the other dinner guests, prompted Jesus to say, “Her sins, which are many, are forgiven, for she loved much.”  From this conflation, now rejected by scholars as well as the church, there came about the popular representation of Mary Magdalene as a penitent sinner or prostitute.

“This image of ‘The Magdalene’ has appealed to artists and dramatists throughout history, and it has doubtless been a comfort to many.  But in attaching such a stereotypically female image to Mary Magdalene the Western fathers also helped efface the memory of the leadership and prominence of women in the early Jesus movement.  This amnesia was already well under way by the time the Gospels were written in the late first century.  One of the most distinctive features of Jesus’ movement was the presence of women among his intimate disciples. And yet the story and even identity of many of these women was left on the margins.

“It is all the more significant when women such as Mary of Bethany, her sister Martha, or Mary Magdalene are named.  It is a sign of just how vital a place they still occupied in the church’s living memory.  Mary Magdalene, in particular, was firmly associated with two vital facts: that she was witness to the crucifixion and that she was the first witness of the Risen Lord.

“Nothing else is known of Mary Magdalene….  But the name of Mary Magdalene deserves special honor, particularly at a time when women are struggling to be heard in the church and society.  It was she, the faithful disciple, who first proclaimed the good news to the Twelve.  Thus she has often been called the ‘Apostle to the Apostles.’”