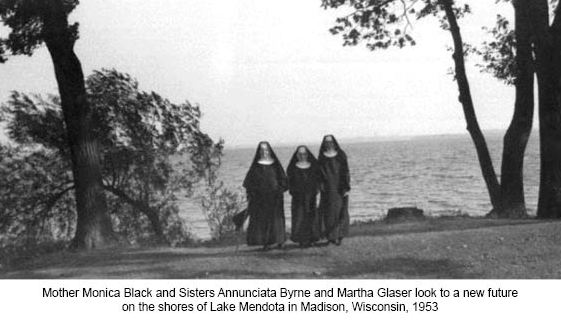 This month the sisters celebrate 60 years of presence in Madison – a wonderful opportunity to renew the vision, commitment and strength of our sisters’ community and to recall the women who set out on a new venture.

In the seeds of our founding, 60 years ago, was a deep faithfulness to God’s call and a pioneering spirit that has moved our community into uncharted waters throughout our history. Most recently this “pioneering spirit” motivated the bold step of becoming the first ecumenical Benedictine community in the US. Reflecting on early ecumenical experiences and the move toward greater ecumenism, Sister Mary David Walgenbach, prioress, writes:

Where does the strength of such vision come from? Surely we are standing on the shoulders of those who have preceded us and traveled with us through these years. We delight in sharing their story.

On March 11, 1953, Mother Monica Black and Sisters Annunciata Byrne and Martha Glaser took the train from Sioux City, Iowa to Madison, Wisconsin and moved into a two-story frame house on Sommers Avenue, near St. Bernard Church. For 50 years St. Vincent Hospital in Iowa had been our work. Now a new permanent location and a new work beckoned the sisters; they would establish a high school for girls. 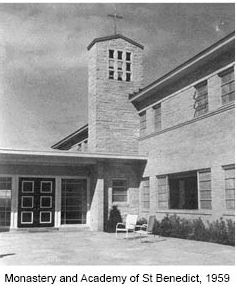 In search of land for a new monastery, the sisters bought 40 acres of hilly farmland in the Fox Bluff area overlooking Lake Mendota. Bishop O’Connor blessed and dedicated the monastery on August 15, 1955. Four years later, the Academy of St. Benedict opened as a girls’ day and residence college preparatory school.

The Second Vatican Council had a major influence on our community, particularly the call for adaption and renewal of religious life and the decree on ecumenism. Monks from Taizé and university campus ministers joined with the sisters in leading weekend retreats held in the Academy building. At the same time a relationship developed between the sisters’ community and members of the Madison Interfaith Dialogue, who met regularly at the monastery and joined the sisters for midday prayer and lunch.

In time members of the Interfaith Dialogue presented a petition to Bishop O’Connor requesting that the sisters open an ecumenical retreat and conference center. In 1966, the sisters’ community closed the Academy and opened Saint Benedict Center for Christian Unity. For nearly 40 years, we led retreats and sponsored programs by noted scholars on prayer, liturgy, scripture and spirituality, and welcomed a wide range of individuals and groups seeking a place of hospitality.

In 1992, the sisters began a visioning process, inviting Benedictine sisters and other religious leaders into conversation to explore the preferred future of our community. The result of these meetings was the decision to work toward the formation of an ecumenical monastic community of Christian women.

In the early 1990s, with the wisdom of many friends and a lot of prayer together, the path became clearer to us. We, as a community, felt the call to deepen our commitment to ecumenism. This commitment involves being a Benedictine community open to Christian women where all are equal and all support each other in our quest for God. An Ecumenical Board was formed to guide the creation, growth and formation of this ecumenical monastic community.

For this community, it has been a history of much change, listening to the Spirit and to the signs of the times, consulting with spiritual friends, and resolutely making our way into an always unknown future. Throughout this process, the constant values of the Benedictine Women of Madison have been the cultivation of prayer and spirituality, the practice of justice, providing hospitality, and caring for the earth.

These are values we are pleased to continue to share with you, our friends, family, donors, volunteers and guests. Thank you for continuing this journey with us.