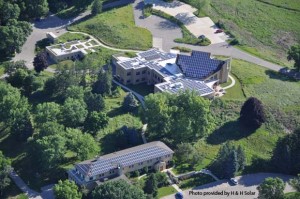 Rooftop solar panels continue to provide electricity for the monastery throughout the winter.

Update, February 24, 2016:  Last November, the Holy Wisdom community decided to begin a new phase of living sustainably. Specifically, we decided to begin using the monastery and retreat and guest house as a living laboratory during the winter of 2015/2016. That included adjusting some temperatures lower during the winter months in different spaces and measuring the impact on energy use and cost. We said that we would monitor the results and report the findings as the monthly bills came in.

We have been monitoring the results and have some exciting preliminary results to share both on the impact of the temperature adjustments and on the impact of the solar energy system expansion. This report will focus on the new monastery building. We’ll review the performance at the retreat and guest house at a future time.

The monastery building is heated, cooled, and ventilated with geothermal systems (ground sourced heat pumps). Thus, almost all of the energy use and cost in the monastery are for electricity to run the system. The results of the November, December, and January electric bills for those three months compared to the same months a year earlier show that the use of electricity purchased from Madison Gas and Electric declined from 113,479 kWh to 76,710 kWh.  The cost of the electricity declined from $16,130 to $10,507, or a 35% decrease in cost amounting to $5,623 in savings. That is a dramatic drop in cost! The decline in electricity use and cost, however, is attributable to both the changes in how we are managing the monastery building and the warmer winter compared to last.

A question that might come to mind is whether the addition of 80 kW of solar PV on the monastery has anything to do with this decline (recall that 45 kW of solar was added to the retreat and guest house)?  As the solar system was in place during both these periods, the answer is mostly no. The reason we say mostly no is that there may have been some variation in the solar production during the two time periods if one winter was sunnier.  We are looking into that data, and will report in the next update.

In the meantime, we hope staff, community members, friends and guests alike are enjoying the results of our efforts in living sustainably.